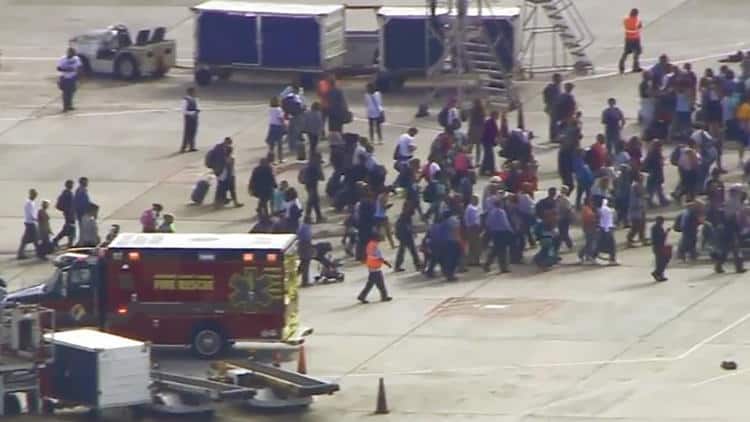 Rescue workers were still looking for other victims at the scene.

Officials have not released more information about the suspect yet, but Florida Senator Bill Nelson told MSNBC that his name is Esteban Santiago and he was carrying a military ID.

Chip LaMarca, a commissioner with Broward County, said that the shooter took the gun from his checked luggage after a flight from Canada, loaded it in a bathroom and then began shooting.

Barbara Sharief, the mayor of Broward County, told CNN that there was only one shooter.

“We have no evidence at this time that he was acting with anyone else,” she told them.

Witnesses say the man had a handgun and allowed himself to be apprehended. Mark Lea, a witness, told MSNBC, “He had no intention of escaping.”

Ari Fleischer, the White House Press Secretary for George W. Bush, was in the airport at the time and tweeted about the scene.

Some flights were being allowed to land at the airport, but others that were further out were said to be diverted to another airport.

Shortly after people were allowed back into the airport, there was a mass rush back outside. There were reports of more shots fired, but they have yet to be confirmed or substantiated.

All services have been suspended at the airport and traveled have been encouraged to contact their airlines for further information.

The FBI is said to be sending a terrorism task force to investigate the shooting.

This is the first airport shooting since a 2013 at the Los Angeles International Airport.

The One Surefire Way to Ruin Your Marriage