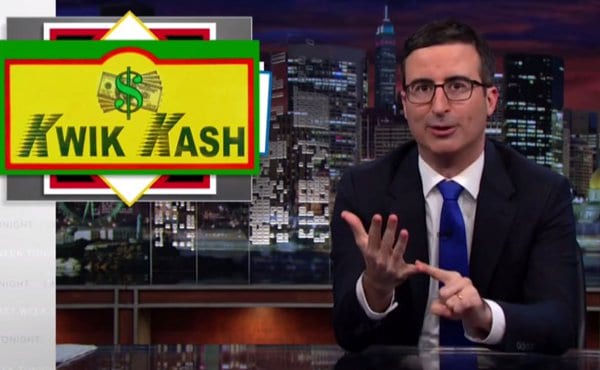 This morning, the Consumer Financial Protection Bureau (the U.S. agency that protects financial consumers) announced a proposal that would restrict “payday” lending—short-term loans basically aimed at low-income earners that can have interest rates as high as 390 percent. The CFPB is not the first organization to question the ethics of payday lending. Actually, the predatory loans have attracted a lot of criticism lately, no small thanks to the late night host John Oliver.

In one of his earliest hot takes on controversial social issues, Oliver tore into the lenders who, in his view, trap low-income borrowers in a perpetual cycle of debt (you can watch the video here, but be warned that Oliver uses strong language and often crass humor). “Basically, payday loans are the Lays potato chips of finance. You can’t have just one, and they’re terrible for you,” he said. And, responding to the oft-cited fact that these kinds of loans are widely popular: “The customer demand for heroin is also overwhelming, and that doesn’t mean it’s a product you’d necessarily recommend it to your friends to get them out of a jam.”

Too many borrowers seeking a short-term cash fix are saddled with loans they cannot afford and sink into long-term debt. … It’s much like getting into a taxi just to ride across town and finding yourself stuck in a ruinously expensive cross-country journey.
This new proposal would force lenders to determine more carefully if some borrowers can afford to take out debt, restrict on loan rollovers and set a max interest rate.

While this kind of action will surely raise questions related to the free market and the government’s involvement in the economy, the move to reduce the unethical lending is certainly welcome.

A Catholic Man In Ohio Was Sentenced to Attend a Baptist Church, Because Justice