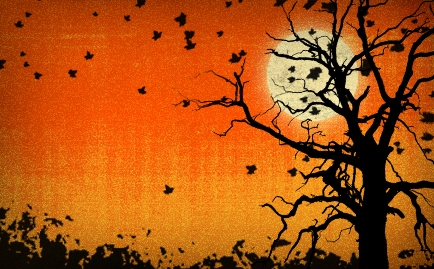 If you grew up in church culture at all, you probably remember a big
brouhaha every October. While “secular people” prepared for Halloween,
your church (or the one down the street or across town) started preaching sermons about Oct. 31, talking about devil worship, how
the candy handed out by unknowing neighbors was probably blessed by
witches, how Halloween was the day when demons ran wild and so on. You
probably listened to the Adventures in Odyssey episode about Halloween.
And if you went to an especially gung-ho church, you probably got some
warnings about Dungeons and Dragons thrown in for good measure.

But your church also knew that it couldn’t do nothing.
So instead you’d have a Harvest party or a Fall Festival—different
titles for everything you wanted to do on Halloween. You just had to
dress as a Bible character instead of a Ninja Turtle. But you still got
candy, you still got to bob for apples and you probably even carved a
jack-o-lan … er, a pumpkin with a cross carved in it.

But even after growing up, when all of that seems kind of strange in retrospect, there’s still the question: What is the deal with Halloween?

Halloween, like most holidays we observe now, is a weird mish-mash of Christian and pagan traditions. Most sources agree that the day we know of as
Halloween was probably originally the Celtic (and pagan) celebration of
Samhain. Samhain was the close of summer, the end of the growing season
and the start of the harvest. Farmers would look at their crops and
herds, deciding how much they would need to make it through the winter.

Celtic pagans in Ireland and Scotland also celebrated the “festival of the
dead” on Samhain. Basically, this was a days-long honoring of the dead
in the family or the community. They believed evil spirits were
especially active during the night of Oct. 31, and often wore masks
and costumes to ward off the spirits.

They would also carve faces in turnips and put candles in them. They would
place these turnip-o-lanterns in their windows to ward off the evil
spirits presumably whizzing around the night air. And Celtic children
would go door-to-door, providing entertainment in exchange for food or
coins. (Incidentally, trick-or-treating would be way
more entertaining if the children were required to do the “Thriller”
dance perfectly before receiving their fun-sized Snickers.)

All of these traditions sound weirdly … familiar. There were other ones
that haven’t lasted, like using divination to figure out who you’re
going to marry—though, come to think of it, it sounds like a pagan
version of M.A.S.H.

When the Church started ministering in Ireland and Scotland, they did what
they’d done plenty of other times: put a Christian spin on an existing
holiday (see: Christmas, Easter). All Saints’ Day (a day honoring, um,
the dead) usually fell within a few weeks of Samhain, so presumably, a
Pope at some point (possibly Pope Gregory IV) thought, “Hey, we can use
this!” The day came to be known as All Hallows’ Eve (referring to the
hallowed day of Nov. 1, All Saints’ Day) which sounds like
Halloween if you say it really fast.

So after all of that, maybe your parents and church were on to something. Halloween clearly came from some pretty not
Christian stuff. And we should all take seriously the world of spirits
and the dangers of real witchcraft and messing with the occult. The
Bible explicitly talks about a world we can’t see, and a world that
very often influences and affects our own. Which begs the question: How
should Christians think about Halloween?

Well … probably the same way we think about Christmas. What does Christmas
mean to you? When you see a Christmas tree or wear red and green for a
cheesy photo, are you thinking about how you can best honor the Roman
god Sol Invictus? And when you eat your Christmas dinner, are you super
pumped about gathering to observe the ancient German pagan holiday of
Yule?

Because that’s where those traditions started.

If you are, then you should probably stop celebrating Christmas (you also
might want to talk to someone about your theology). But if you aren’t,
then Christmas is likely the time you remember Christ’s birth and how
His birth provides the opportunity for salvation and ushered in a
Kingdom that is changing the world.

In the same way, ask yourself what you’re doing on Halloween and why. Are
you going to a seance, using the night as an excuse to wear an “adult
nurse” costume or see how fast you can get throw-up drunk? Probably not
a good idea. But are you dressing up as a member of Team Zissou,
hanging out with friends and bobbing for apples? That’s probably OK.
We haven’t Christianized Halloween like we have with Christmas and
Easter traditions—but most of the Halloween traditions that American
culture celebrates are innocent fun, not pagan. Carving Justin Bieber’s face
into a pumpkin doesn’t bring to mind protection against evil spirits, and putting on a Snooki mask doesn’t equate dancing around a fire to protect yourself against demons.

As with many of our traditions, it’s worth taking the time to look back
and wonder, “Where did this come from?” Halloween is no exception. And,
like many of our holidays, it can be misused, abused and downright
non-Christian. But using the time to have some fun with friends and
give kids some candy? That seems like a pretty Christian thing to do.
Just don’t give the kids a tract instead of candy. That’s just mean.