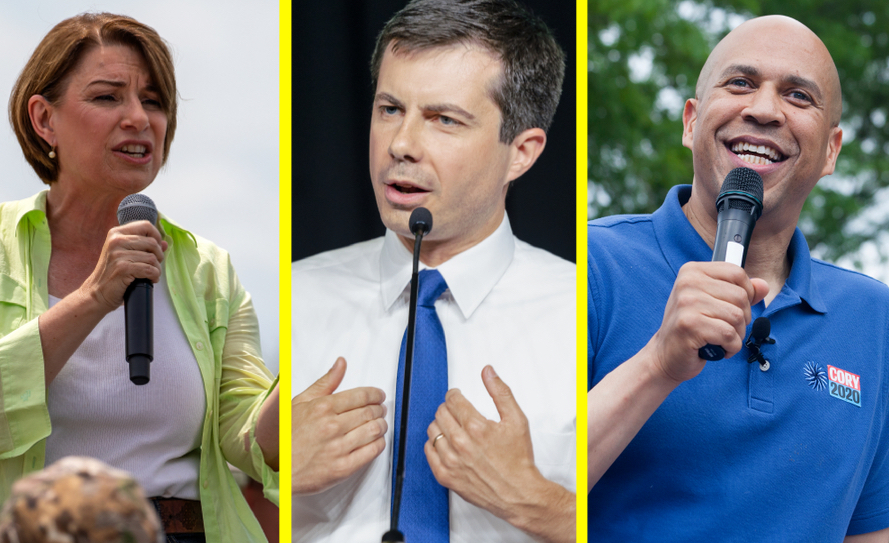 Every election cycle, a faith coalition called The Circle of Protection asks presidential candidates about their plans to fight hunger and poverty.

The Circle of Protection (not to be confused with the Wiccan spell) is made up of a diverse array of Christian groups like the National Association of Evangelicals, the National Council of Churches, the Catholic Church and many other organizations that are united in their concern for the poor and say they are “praying for a president who will make ending hunger and poverty a top priority of his or her administration.”

In 2012 and 2016, all major presidential candidates responded. Last week, the Circle of Protection released all the video responses they’ve received so far.

“Being poor is not a sign,” Booker says. “But in a nation this wealthy to have the highest levels of child poverty of all industrial nations, that is sinful.”

“Love of a country is a wonderful thing, but love shouldn’t stop at borders,” Booker says. “America can play a global role in eliminating poverty worldwide.”

“I believe the Scripture that teaches us that ‘whoever oppresses the poor taunts his Maker,’” said Mayor Pete. “I believe in faith that instructs us to attend to the words ‘I was hungry and you fed me. I was a stranger and you welcomed me.’”

Klobuchar said fighting child poverty would be a “cornerstone” of her presidency, saying “that means cutting child poverty in half in 10 years and ending it within a generation,” Klobuchar said. “If you don’t believe me, look at the National Academies of Science report. They actually lay out a plan of how you can do this. That is where I got my idea. That is where I get my plan.”

Delaney said that he would “create a form of universal healthcare so that every American has healthcare as a human right.”

Newcomer and billionaire Mike Bloomberg quoted from Proverbs, saying the biblical call is to “speak out for those who cannot speak” and “for the rights of all the destitute.”

“When I was mayor of New York City, we had the most ambitious anti-poverty program in the country,” Bloomberg said. “As president, I will attack poverty and hunger with the same urgency in every small town and big city across this country.”

Bennet says that his American Family Act is “the most progressive anti-poverty proposal since Medicaid.”

“My vision for America centers on building an equitable future for the most marginalized,” said Steyer.

“The Good Book tells us, ‘Feed the hungry and help those in trouble. Then, your light will shine out from the darkness and the darkness around you will be as bright as noon,’” he continued.

The Circle of Protection is still waiting for responses from President Donald Trump and his Republican primary challengers like Governor Bill Weld and Joe Walsh.

Democrats who have yet to respond include Elizabeth Warren, Bernie Sanders, Andrew Yang and Marianne Williamson. Circle of Protection urged their supporters to reach out to these candidates over Twitter and ask them to put together their own video in response to Circle of Protection’s letter.

Attention: There Is a New ‘Top Gun: Maverick’ Trailer