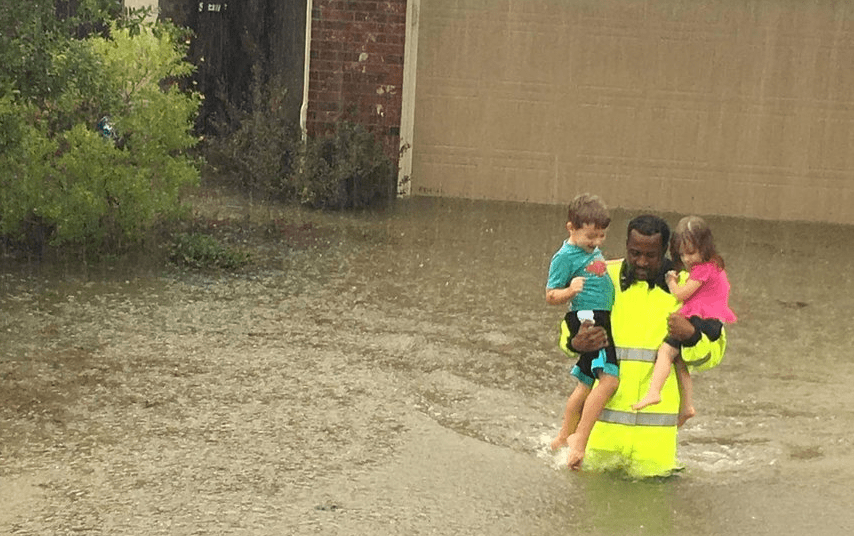 The aftermath of Hurricane Harvey continues to pound Texas, where the government has rescued some 2,000 and still more are counting on volunteers like the infamous Cajun Navy to deliver aid and rescue. There’s a lot of sadness and devastation in Texas right now, and FEMA is calling on anyone and everyone who can to get involved in the relief effort. If you need a little motivation to pitch in, here are just a few of the rescues that have been captured by cameras.

This man is a preacher checking for people inside cars at 610 & 288 PC Brian Roberson Jr @KPRC2 #Harvey pic.twitter.com/NJx58ZN8N8

Dear God some people give me such hope:

REPORTER: What are you going to do?

HERO: I’m gonna save some lives.pic.twitter.com/Qj2nmvCD97

“I’m gonna go try and save some lives.”

AMAZING RESCUE: A person was holding on to their car and trying to survive when two men saved him on the Katy Frwy https://t.co/pIUUByO9QM pic.twitter.com/42JevueFc3

Two men find a person trying to survive in his car as the floodwaters grow dangerously high.

A man clinging to a street sign, stranded in the middle of dangerously high flood waters, gets an incredible rescue: https://t.co/O0kp2W0FQj pic.twitter.com/crl76RrO5O

Two men overheard a third calling for help while holding onto a sign. They were able to float what looks like some sort of refrigerator out to him and pull him to safety.

My town: Dep. Constables Fernandez, Tran & Patel rescue a woman down the street from me. Photo by Jon Shapley of @HoustonChron. pic.twitter.com/XhMhxLBY9Y

The U.S. Coast Guard delivering some arial rescues to people and their pets.

A few moments ago in Houston. pic.twitter.com/rokkRCiA2P

And because all life is precious, here’s one woman who’s out rescuing bats from underneath flooding bridges.

Alicia Plunkett is saving bats from drowning in Houston, as water reaches the top of bridges pic.twitter.com/wHnrbN3Sy8

Ready to get involved? Here’s how you can help.