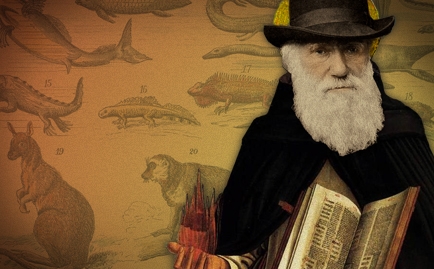 Can we believe in a Creator and evolution?

Arguing for God being the Creator of the universe doesn’t necessitate an attack on the theory of evolution. Don’t misunderstand me; some evolutionists (particularly some of the neo-atheists like Richard Dawkins, who argues in his new book people who don’t believe in evolution are on the same level as Holocaust deniers) have gone ape over their theory (forgive the pun) to the point that they seem to forget it is a theory, and refer to it as if it is an undeniable scientific fact. (Please note: when I speak about evolution, I’m referring to Darwin’s macroevolutionary theory: life began millions of years ago from a kind of primordial ooze that gave rise to single-celled creatures, which then evolved into more complex ones, all the way up to we humans.)

Is the theory of evolution true? It definitely has its problems, but whether it is or isn’t true doesn’t impact the notion that God is the Creator of the world. Scientific theories about origins simply talk about how things came to be, not whether God was behind it. For Christians to argue about scientific theory—any theory—because they think it attacks the notion that God is the Creator seems silly.

What if the point of the creation narrative in Genesis was more poetic than literal? Historically, the Church has always held this position about creation. The Church’s take was simply that God created the world. That’s it. Before the nineteenth century, the Church never tried to specify how or when God did it. Those in the ancient world (to whom the text was written) did not think in literal or scientific terms, nor would they have cared about such notions. The big news of Genesis to the ancient world was that ONE God, not many, was responsible for all we see. That radical, salient point rang through that world which believed in many gods—not one—and had absolutely nothing to do with science.

A belief in God does not necessitate that a person accept the position that the earth is just six thousand years old. The historical, theistic argument is simply that we believe God is the why behind what is here, whenever and however it got here. Scientists may ultimately tell us how and when everything happened in ways not articulated in the biblical text, but science will never be able to tell us why. Why is the stuff of belief. Understanding this helps us be open to the research and questioning of science, while recognizing such questioning is not an enemy to faith.

Science does not have to be an enemy of faith. Nanoscientist James Tour, a professor at Rice University, spends his life building molecules in the lab. He says, “I stand in awe of God because of what he has done through his creation. Only a rookie who knows nothing about science would say science takes away from faith. If you really study science, it will bring you closer to God.”

One could say that the order of non-living things—the laws that govern physical objects, the earth orbiting the sun, the seasons coming and going, the laws governing atoms and the subatomic universe—is enough evidence to assert that there is a God who designed things to be the way they are. But the most compelling evidence—the evidence that seems to scream: THERE IS A GOD! — comes from things that are alive.

Dr. Walter L. Bradly, an expert on polymers and thermodynamics, says, “Ice crystals have a certain amount of order, but it’s simple, repetitive, and has a low amount of information, sort of like filling a book with the words, ‘I love you, I love you, I love you’ over and over again. In contrast, the kind of complexity we see in living matter has a high information content that specifies how to assemble amino acids in the right sequence, like a book being filled with meaningful sentences that communicate a story. Unquestionably, energy can create patterns of simple order. For instance, you could see ripples on the sand at a beach and know they were created by the action of waves. But if you saw the words, ‘John loves Mary’ and a heart with an arrow drawn in the sand, you know that energy alone didn’t create that.”

Even the smallest, single-celled organisms have more complexity within their cellular walls then anything scientists have been able to recreate using huge supercomputers. What guides the process in all living things is DNA, which regulates every cell of every plant and animal. The DNA molecule is like a tiny microprocessor that controls everything a living cell does. The data encoded on the DNA inside every cell of every living thing is a kind of written language. The English language uses a twenty-six-letter alphabet; DNA uses a four-letter chemical alphabet. As the chemicals are arranged in various “lettered” sequences, they form what amounts to words, sentences, and paragraphs containing all the instructions needed to guide a living cell. The DNA molecule instructs cells on how to make proteins, what and how to eat, how to get rid of waste, when to divide, how to repair itself, and so on. So, where did DNA come from? How was the code “written?” Was it written by chance or was there a Designer?

British chemist Leslie Orgel once said, “Evolution is smarter than you are,” to which atheist Christopher Hitchens responded, “But this complement to the ‘intelligence’ of natural selection is not by any means a concession to the stupid notion of ‘intelligent design.’”

Why not? Why couldn’t evolution have an intelligence that was put in it by God? That Hitchens (along with the other neo-atheists) can make no “concession” to the possibility of God being involved is evidence of a silly prejudice. It is not a logical observation.

Ed Gungor is a pastor and author. He can be found at SaltTribe.org.

A God on True Blood?