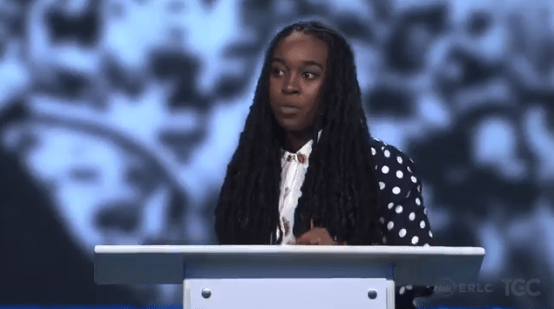 Perry spoke on the limited progress we’ve seen in racial justice, but also offered a path forward for how we can further our efforts right now and set an example for future generations. She rooted the argument in Dr. King’s “A Letter From a Birmingham Jail.”

“Don’t you find it troubling that Letter from a Birmingham jail—a letter Dr. King wrote in 1963 to white Christians—contains the same frustrations being voiced to our white brothers and sisters today in 2018? This generation has not fully improved upon the beliefs and the behavior of the prior. The urgency of justice is still being questioned.”

“We can’t model what we don’t believe. Your children, your mentees, your disciples, your youth group—they are learning from you even if you don’t know yet.”

“Letter from a Birmingham Jail” was written 55 years ago after Dr. King was arrested during a campaign of coordinated marches and sit-ins in Birmingham, Alabama. In the letter, Dr. King calls for unity among his fellow clergymen and defends his strategy of nonviolent, but active, resistance in the Civil Rights Movement.

At the time of the letter’s writing, many of Dr. King’s peers in the clergy were advocating for civil rights to be argued for in the courts rather than the streets, but King maintained that the actions of the protesters were grounded in a moral responsibility to create social tension and urge change.

In her speech, Perry iterated Dr. King’s message and proposed that direct action against injustice continue.

“Our expectations have to be modeled if we expect them to be followed,” she said. “They’ve seen who you invite over for dinner. They’ve heard how you pray for your country, and some have never heard one plea for the peace of a young mother whose son was killed in the backyard. They are watching who you watch. They are listening to who you are learning from. Your indifference will be to them a norm to which their world views will be shaped.”

MLK50 is rooted in gospel messages and gospel hope, so Perry pivoted toward empowerment as she began to close: “Because God is in us, with His help we can do what our fathers didn’t do.”