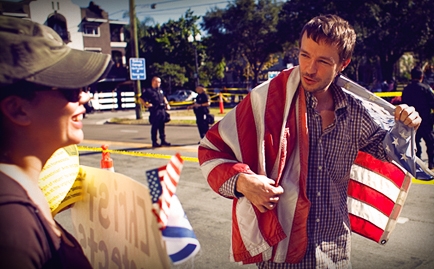 In Afghanistan and Iraq, war is dragging on at a pace even Aesop might question. Tomorrow marks the 7th anniversary of the start of the War in Iraq, and Christians have reignited the age-old debate on how we should address war. Traditionally, this debate has had only two sides: Just War and Pacifism. Recently, however, a new perspective has emerged called “Just Peacemaking.” In this story, RELEVANT talks to experts from two sides—Just War and Just Peacemaking—on the morality of war.

Daniel Heimbach is Professor of Christian Ethics at Southeastern Baptist Theological Seminary. He served from 1989 to 1991 at the White House as Associate Director for Domestic Policy and Deputy Secretary of the Domestic Policy Council. Heimbach is credited for drafting the moral framework used by President George H.W. Bush for the 1991 Gulf War.

David Gushee is Distinguished University Professor of Christian Ethics at Mercer University and president of Evangelicals for Human Rights.

What is Just War theory?

Heimbach: Just War takes a mediating approach between the extremes of Pacifism and Crusade. With Pacifism, Just War agrees that war is a tragedy to avoid as far as responsible government can allow without failing its duty to protect the innocent from tyrannical predators, and disagrees only in saying that war is sometimes a tragic moral necessity in a fallen and imperfect world. With Crusade, Just War agrees that responsible government sometimes must use deadly force to resist tyrannical evil, but disagrees that war should ever be used to impose new visions of social order that either did not, or have never, existed before.

What is Just Peacemaking theory?

Gushee: Traditionally, Just War and Pacifism have answered the question of whether or not it is OK to go to war. Just Peacemaking theory shifts the question to: How do nations, churches and Christians obey the teachings of Jesus and make peace? What kinds of steps can be taken to prevent the resort to violence? The theory then proposes a number of practices that history shows contribute to conflict resolution and peacemaking, and requires both Christians and policy-makers to practice these and therefore do all that they can to avoid war. These practices include nonviolent direct action; independent initiatives; cooperative conflict resolution; acknowledgment of responsibility for conflict and injustice; advancing democracy, human rights and religious liberty; and fostering just and sustainable economic development.

Where is Jesus in your theory? What role does Jesus’ teaching or example play in your understanding of war?

Heimbach: This is the most important question anyone could ask about the ethics of war and peace. In the only place Jesus clearly addressed peace in the sense of nonviolence, He categorically denied that He was teaching Pacifism. Jesus also assumed that morally responsible kings must sometimes go to war (Luke 14:31). Before leaving the Upper Room, Jesus told His disciples that after He left this earth, they should have a plan to use weapons of deadly force to defend as necessary against attack (Luke 22:36). This does not mean Christians should be bellicose and go around stirring up wars, but neither does it mean Christians can never use deadly force at all for any reason. We must not forget that Jesus of the New Testament is also God of the Old Testament, and that the moral character of Jesus doesn’t change. So, if God in the Old Testament approved of Just War, then so must Jesus in the New Testament.

Gushee: Jesus is absolutely pivotal in Just Peacemaking. Everything about this theory represents an effort to put His Kingdom teachings about peacemaking into effect in the international arena. Jesus was not interested in the “when is it OK to go to war” question. He was about the reign of God, and taught concrete practices that enable progress toward that reign, one aspect of which is peace. One of the principles of Just Peacemaking is speaking to your adversary whether or not you agree with them or if they have hurt you (Matthew 5). We should take the first step to mending relationships in the international arena just as we do in the interpersonal arena. We should also recognize one’s responsibility in conflict. In Matthew 7, we are taught to look at the log in our own eyes rather than seeing the speck in someone else’s. Just Peacemaking doesn’t just blame the adversary but accepts that things we have done have often caused the problem. Forgiving multiple times if necessary. Just Peacemaking says that Jesus’ teachings are realistic and apply even in international conflict. The New Testament (Philippians 2) says you should look out not for your own interests but the interests of others. You must acknowledge the legitimacy of the other side and take their interests seriously.

Can you give an example of a just war and an unjust war?

Heimbach: No actual war in human history can be treated as beyond moral criticism. But we can observe some wars that have been fought on generally just terms. I would say that the Persian Gulf War denying Saddam Hussein the fruits of tyrannical aggression was conducted on Just War terms, while the Japanese attack on Pearl Harbor, the terrorist attacks on 9/11, Palestinian rocket firings on Israel, and our own firebombing of Japan at the end of WWII are all examples of unjust war.

Gushee: I believe that the invasion of Afghanistan to topple the Taliban and capture Osama bin Laden after 9/11 was a just war. World War II was morally justified. The attack on Iraq in 2003 was not justified because the present cause for that war wasn’t present. It failed many tests for being a just war, including the last resort test, as we failed to pursue serious negotiations. Furthermore, you have to take seriously the opinion of the international community in this day and age, and we didn’t get international support. As it turns out, we didn’t get their support for very good reasons.

How does your approach to war speak to the issue of torture and aggressive interrogation?

Gushee: Both international and domestic laws have for decades clearly declared that torture is never a legitimate means of war-fighting, and is in fact a criminal act. Just Peacemaking theory might also add the acknowledgment that the worse our nation treats those in our custody, the more we create even more embittered and determined adversaries.

Heimbach: Of course we must never sanction any immoral use of force, and rejecting any sort of inherently evil means is already a vital part of the Just War ethic. But whether, when and to what degree it might be warranted to use coercion on non-cooperating prisoners depends on principles such as last resort, likelihood of success, distinguishing those participating in combat action from those not participating, and comparing the cost of anything lost, harmed or destroyed to the value of what is at stake in using coercive force. So, for example, I do not think water boarding can be automatically dismissed as inherently evil means.

Gushee: International treaties and United States law are clear that certain methods are immoral. Dr. Heimbach is badly mistaken in allowing water boarding. That is a really unfortunate position for a Christian to take. What Just War theorists should recognize is that there are certain means that shouldn’t be used because they are intrinsically wrong. Torture is one of them. Once you allow extreme measures such as water boarding, you begin down a very dangerous, slippery slope. Even if you get some information here and there, you radicalize your enemies and lose the moral high ground.

If Livestock Populations Double, Trouble’s Ahead