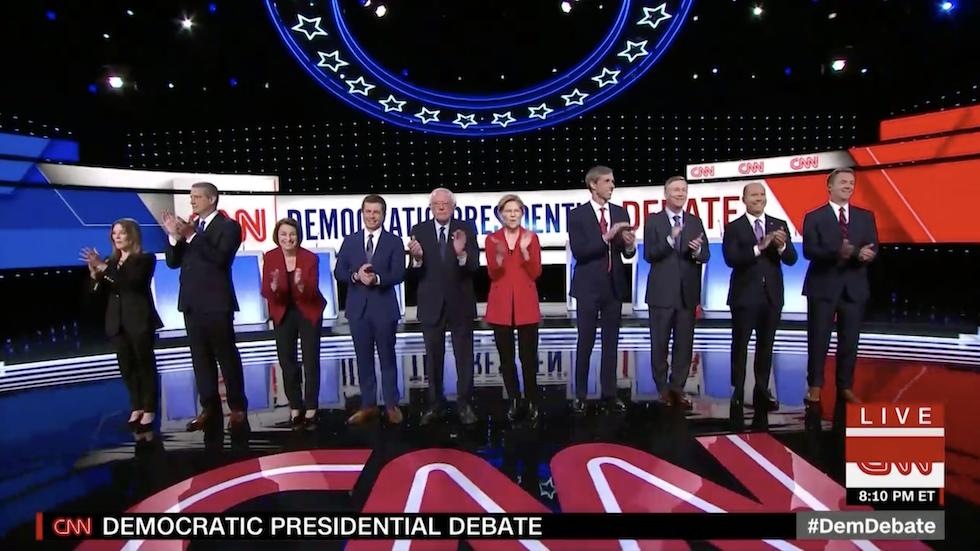 On Tuesday, progressive Senators Bernie Sanders and Liz Warren faced off against more centrist Democrats like Mayor Pete Buttigieg, Beto O’Rourke and about six other people who will not be President. The ostensible goal of the evening was to start thinning out the candidates and give the best ideas a moment to shine, but what actually ended up happening was CNN moderators trying their darndest to push buttons, inject a little drama into the proceedings and drive up those ratings.

A myriad of topics was covered, from foreign policy to college tuition to climate change, though healthcare was the major theme of the evening. It’s very unlikely your opinions went through a sizable shift. Sanders and Warren showed why they are far and away the most popular candidates at the table, while more moderate standard-bearers made their cases and hoped for the best. Only self-help guru Marianne Williamson might have shifted things in her favor a bit, dolling out a couple of compelling soundbites about her plan for racial reparations that got big applause from the audience.

Religion, famously considered to be a bit of a liability by Hillary Clinton’s campaign, has been a much bigger factor in this year’s Democratic race. Warren has made much of her time as a Methodist Sunday School teacher, and one of Buttigieg’s favorite topics is carving out a space for “the religious left.”

Here are a few times spirituality showed up at the debate.

The night began with a singing of the national anthem as sung by Detroit’s Perfecting Choir, led by Marvin Winans — a member of gospel music royalty the Winans family. He’s the pastor of Perfecting Church, a large and influential Detroit church, and while socially conservative himself, has gone on record saying that it’s “impossible” for someone “of good mind” to vote for President Donald Trump.

Mayor Pete on the Minimum Wage

The most explicit invocation of the Bible came from Buttigieg, who quoted a Bible verse to defend his plan to boost the minimum wage to $15.

“The minimum wage is just too low,” he said. “And so-called conservative Christian senators right now in the Senate are blocking a bill to raise the minimum wage when scripture says that, ‘Whoever oppresses the poor taunts their maker,'” a quote from Proverbs 14:31.

Williamson is a self-help guru whose New Age spirituality made her a hugely important part of the early-00s “wellness” movement. Her ascendance has been marked by contrasting moments of eccentricity (some truly wild tweets and a couple of eye-raising moments at her first debate) along with some stirring moments of genuine conviction and pathos.

As The New York Times religion reporter Elizabeth Dias noted, if the 2016 election was proof mainstream media outlets didn’t really understand the religious right, this one might showcase its blindspots about the spirituality on the left.

Williamson’s most concrete plan is regarding racial reparations. While most of the Democratic candidates have expressed an openness to exploring the idea of offering black Americans reparations for slavery, Williamson is the only one talking about cutting real checks. Her remarks on that plan were the evening’s most moving and direct confrontation of racism, though she couldn’t help but attribute at least some of America’s “collectivized hatred” to a “dark psychic force” manifested by Trump. A bit offbeat, perhaps, but she was the most Googled candidate of the night.