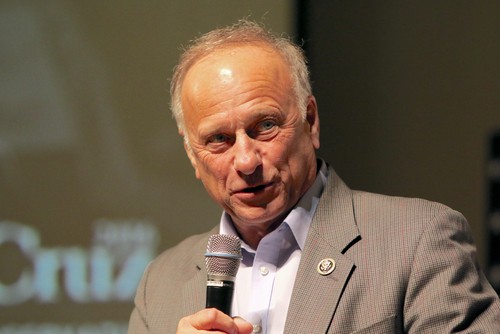 Iowa Congressman Steve King has won nine elections and has used white identity politics as a key part of his campaign in all of them. Long before President Donald Trump grew distressingly comfortable with certain extremist alt-right factions of the Republican Party, King was voicing some explicitly racist beliefs online.

King has supported people with Neo-Nazis ties, retweets notorious anti-semites on Twitter and has said things like “We can’t restore our civilization with somebody else’s babies.”

The GOP had mostly held King at arm’s length until recent years, as his racist politics have become far less fringe. Although condemned by Ohio’s Rep. Steve Stivers, chair of the National Republican Congressional Committee the official campaign arm for House Republicans, King himself says that he was invited into the Oval Office to advise the President on immigration policy.

In an interview with The New York Times on Thursday, King let loose a jaw-dropping quote that might be King’s most explicit public endorsement of white identity politics yet: “White nationalist, white supremacist, Western civilization — how did that language become offensive? Why did I sit in classes teaching me about the merits of our history and our civilization?”

Nevertheless, the NYT says that King denied being a racist and noted that there are social media posts of him interacting with people of other races. According to the profile, King “supports immigrants who enter the country legally and fully assimilate because what matters more than race is ‘the culture of America’ based on values brought to the United States by whites from Europe.”

King may say he’s not a racist, but racists certainly see him as an ally. “Steve King is basically an open white nationalist at this point,” wrote founder of the neo-Nazi Daily Stormer Andrew Anglin.

Last August, King conducted an interview with a far-right Austrian website in which he spoke of a racist conspiracy theory called “the Great Replacement,” which postulates that a group of cloaked elites is trying to wipe out Western Civilization by making white people a minority. (This was the view being touted by alt-right protestors in Charlottesville who chanted “Jews will not replace us.”)

“Great replacement, yes,” Mr. King told the website. “These people walking into Europe by ethnic migration, 80 percent are young men.” He then went on to dismiss the idea of diversity.

Are Americans Less Likely to Be Religious If They’re More Educated? It’s Complicated