The crisis in Ferguson, Missouri started off as a plea for the truth about what happened to a young man—a truth we may never really know for sure.

But in the ensuing weeks of protests, police and politics, it’s become about many other things as well. The militarization of the police force, the rights of protestors and journalists and, above all, the state of racial equality in America.

We spoke with Lisa Sharon Harper, Sojourners’ Senior Director of Mobilizing and author of Left, Right & Christ: Evangelical Faith in Politics, among many other books. She gave us her take on what’s happening in Ferguson, and how a fresh understanding of the Gospel can bring healing.

What’s been the most surprising thing about how this situation has unfolded?

Honestly I’m not sure that it’s surprising as much as it’s been instructive and revelatory. There is so much work to do to help people grasp that “the other” as ones who are created in the image of God.

The heart of my understanding of what it looks like for us to live and walk in the Jesus way—walk as Jesus walks—is to fully grasp the inherent dignity of every human being on earth. Every single one. As a result of the inherent dignity—as a result of the image of God being in each person—then each person is inherently deserving of full protection of the law, or equal access to the basic needs of life and equal access to justice.

The ironic thing I think about this is that Ferguson is not the only one to happen. It was actually the last of four that happened in the course of a month—with all four being police violence against African-American men, black men, who were unarmed and who at the very, very least deserved a fair trial by a jury, and who deserved equal treatment under the law.

There seems to be institutional discrimination in place in Ferguson, where even though the majority of the community is African-American, the police force was overwhelmingly white as well as local elected officials. How did this community become so under represented?

With everything that’s going on in Ferguson right now, what I hear is that black leadership is beginning to repent for its abdication of leadership. What I’m talking about is repenting from inaction. They’re beginning to pick that baton back up again, and voter registration is a very big thing right now. I think that’s a beautiful and powerful development.

I want to talk about the spiritual steps forward, but on a practical level, do you think voter registration and these awareness and empowerment efforts to get re-involved in politics is going to be an important step for the Church?

That’s interesting that you separate the two, because my understanding is that voting is really about exercising our agency. That’s why the Voting Rights Act is so important.

In Scripture, the closest thing we have to agency is actually the call to exercise dominion in Genesis 1. I think that word dominion has been really misunderstood for a long time, and many theologians are beginning to reclaim what it actually meant.

It actually meant something closer akin to “stewardship,” and the ability to make choices that impact your world and to steward the world, to care for it. If you can’t vote, then you can’t do that. That’s one of the reasons folks are repenting now and beginning to do voter registration.

The call to exercise dominion in Ferguson, in part, means to vote. It means to take part, and to let your voice be heard and to let your vote count. A vote in a town like Ferguson can mean the difference between having a police chief or a prosecutor who understands and sees the image of God in you and seeks to protect that and one who doesn’t.

My question I guess was an indication that a lot of times some Christians wrongly separate their spiritual lives and things that they’re doing politically.

What’s happening in Ferguson has disturbing similarities to different civil rights events in the 60’s. How can we stop the cycle? How can a younger generation of Christians help prevent the cycle from being continued?

It is a very real thing that if we are only associating with people who are like us, particularly in ethnicity in America, then we are most likely insulating ourselves with people that have very similar worldviews.

If you are only surrounding yourself with people who are like you—particularly people who are affluent, have more opportunities than others—then you’re not going to understand when the kids are screaming on the TV, and you see the news that riots broke out again in Ferguson.

I can imagine what is going through people’s heads who have not experienced that, like, ‘What’s wrong with those people?’ The problem is not with the people. It’s with what those people are having to endure every single day.

Because we have insulated ourselves from that oppression, we not only don’t understand it, we don’t believe it.

I would say that the first thing this generation can do, and is doing already a lot better than previous generations, is to break the color and ethnicity barrier within our friendships and our communities.

I think No. 2 is to begin to ask those friends who are not like ourselves, ‘What do you care about? What is it that you are working for? What is your story?’ Ask them, ‘How can I leverage what I have on behalf of and in partnership with the work that you’re already doing, in order to lift the oppression that you’ve been living with for much of your life?’

That is a place where this generation can actually see these are the effect. This is a clear manifestation of implicit bias at work in the systems in our nation, in our towns, in our cities and in our states. These are places where followers can go, and because of their faith. We can look at our own Scripture and see a roadmap of how to confront the powers and to call them into a right relationship with the people that they’re governing.

I recently heard someone say that the situation in Ferguson is a gospel issue. Exposing injustice and correcting it is ultimately what we’re called to do as the Church.

There are examples all throughout Scripture of ways that God calls people to care for them personally and structurally. They use this, as followers of Jesus, to be people who are called kingdom builders.

That’s why this is essential to the gospel. It’s really about what the kingdom of God requires. It requires the reconciliation of all relationships broken at the fall including the relationship between humanity and the systems that govern them.

You Are More Than Your Resume 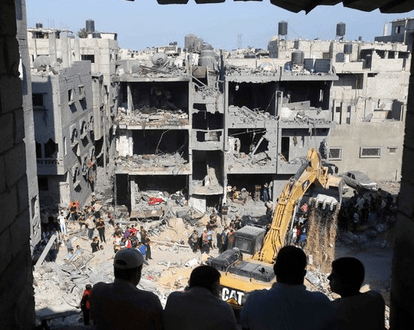 Report: Hamas Official Claims Group Is Responsible for the Kidnapping and Murder of 3 Israeli Teens