Most Americans agree: Our politics are in bad shape. It’s the way you think it’s in bad shape that shapes much of your political engagement. Lots of studies suggest that voters are pretty tired of the binary two-party system, and many of us don’t feel like we truly fit into either the Republican or the Democrat camp, even though those are the only two options available.

Or, so it seems. A new Pew study attempts to give us a more accurate picture of the ideological picture in the U.S. by sorting people into groups by what they actually believe — not just the two parties present. Through that, Pew found roughly nine ideological groups Americans fall into. And while these groups still fall on a left/right spectrum, there’s a lot more tension and diversity then tends to be represented in many media outlets — or in Congress, for that matter. Americans have a lot of different ideas about the economy, foreign affairs, race and gender issues, religion and immigration. 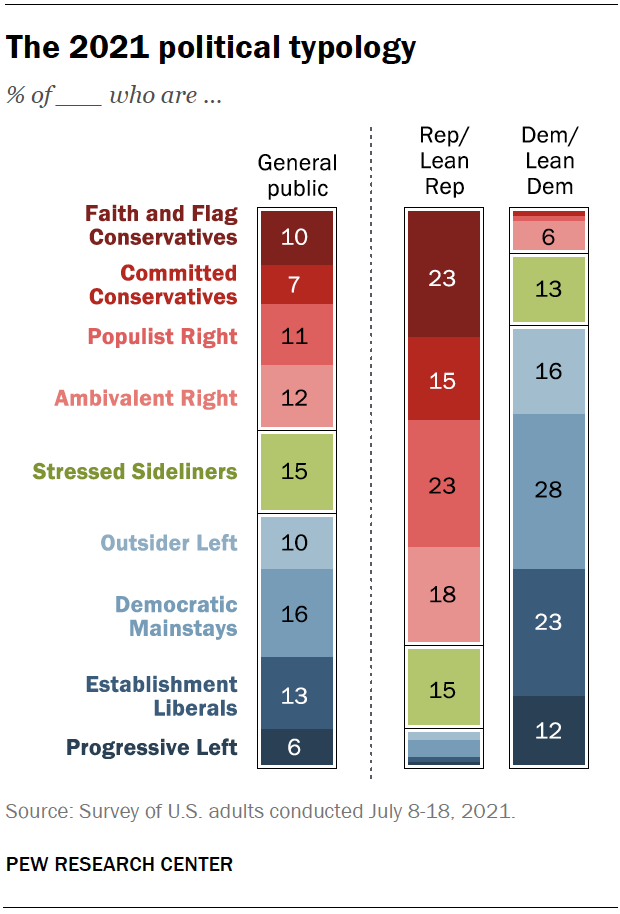 To start, let’s look at the Republican-leaning groups. According to the survey, most Republicans are united by a belief that the government is too involved in public life and that all Americans have an equal opportunity to get ahead in life, regardless of their race or gender. But under this general definition, there’s a lot of competing views.

23 percent of “Republicans and Republican-leaning independents” make up the Faith and Flag Conservatives. They’re the oldest and most conservative of the right-leaning group. They’re also among the Whitest, and very engaged in politics. They believe that Christianity should be the “center” of public life in the U.S. They tend to strongly support former president Donald Trump, and think he either probably or definitely won the 2020 election.

Next are the Committed Conservatives, who make up 15 percent of Republicans and Republican-leaning independents. These people are well educated, and more interested in conservative economics than the culture war. They’re pro-business, want small government, and tend to be bigger fans of former President Ronald Reagan than Trump.

Then comes the Populist Right — 23 percent of Republicans and Republican-leaning independents. These voters are less likely to have gone to college and more likely to live in rural areas. They draw the hardest line on immigration of any group surveyed, and extremely critical of the current economic system, which they say is rigged for the wealthy. They remain big fans of Trump.

Then you’ve got what’s called the Ambivalent Right — a relatively young and irreligious group that makes up 18 percent of Republicans and Republican-leaning independents. They’re not very into politics and don’t even necessarily identify as conservative, even though their economic views line up with conservatism. They’re more moderate on social issues like immigration, marijuana legalization, same-sex marriage and abortion, and the majority believe President Joe Biden won the 2020 election — the only Republicans and Republican-leaning independent group to do so.

In the middle, you’ve got what Pew calls the Stressed Sideliners — made up of five percent of Republicans and Republican-leaning independents and 13 percent of Democrats and Democratic-leaning independents. These people are socially liberal, economically conservative and financially stressed. They’re not very politically engaged and don’t feel that next year’s midterm elections “matter.”

Then you’ve got the left side of the spectrum.

Most Democrats are united by a belief in a strong federal government that should be more involved in public life, and that significant obstacles to equality remain for women, and minority groups like nonwhite Americans and members of the LGBTQ community. They also believe that the current economy is unfairly tilted towards the wealthy and powerful — a belief shared by some, though not all, Republican and Republican-leaning voters.

The Progressive Left makes up 12 percent of Democrats and Democratic-leaning voters. This group is young, well-educated and about two-thirds White. This group backed Senators Bernie Sanders and Elizabeth Warren in the 2020 election, and have the most liberal policy positions of any group surveyed.

Next are the Establishment Liberals, who make up 23 percent of Democrats and Democratic-leaning voters. They’re more moderate than Progressives, preferring reforms to revolution and are the most likely group of all voters surveyed to urge compromise with members of the other political party.

Next up is the largest group of Democratic-leaning voters, the Democratic Mainstays — who make up 28 percent of the group. They’re older, more moderate and less likely to be highly educated than other groups. They’re also the most racially and ethnically diverse of all the groups, taking a liberal view on issues like race and the social safety net, but a more conservative view of crime, the military and immigration.

And finally, there’s what’s called the Outsider Left — the youngest of the Democratic-leaning groups. They make up 16 percent of Democrats and Democratic-leaning groups, and although they’re very liberal on issues like race, immigration and the climate, they’re pretty unhappy with the Democratic Party — to say nothing of the country as a whole. They’re cynical about elections and the future, and feel that other nations are doing a better job of caring for their citizens than the U.S.

Into which group do you fall? Well, if it’s not immediately clear from the write-up, Pew’s got a quiz for that here.

Leonardo DiCaprio Is In Final Talks to Play Jim Jones, the Infamous Cult Leader Behind the Jonestown Massacre