We all live in a world built on perceptions and assumptions. It’s human nature. You assume most people are more or less safe drivers, most teachers are good with kids and most text messages you get are from the people your phone says they are. What else are you supposed to do? For the most part, this is all correct and fine. But a new study shows just how off many of our perceptions about our fellow Americans actually are.

YouGov has released an interesting study that asked Americans to take a guess at the size of various minority and majority subgroups of other Americans, such as hypothesizing what percentage of other Americans are Black, or Muslim or gun owners. The results reveal how many of us are living in a bubble put together by media narratives and bad faith politicians. 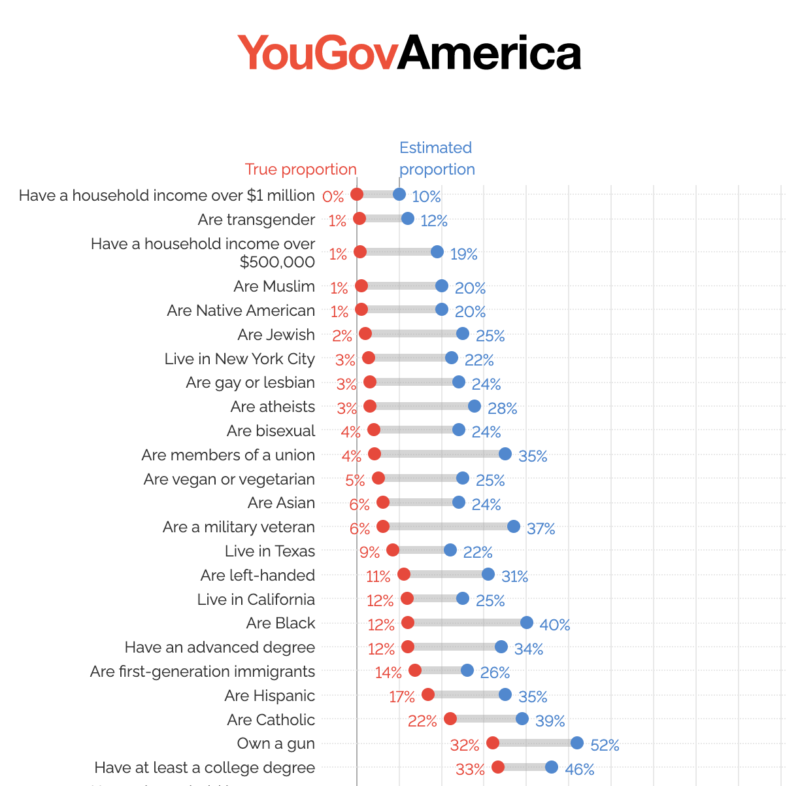 But that’s not all. The study also found that Americans tend to underestimate the size of majority groups. On average, respondents guessed that 58 percent of Americans are Christian, while it’s actually 70 percent. They figured only half of Americans have read a book in the last year, when 77 percent actually have. And respondents guessed only 65 percent of the population has at least a high school degree, when nearly 90 percent do.

Interestingly, respondents tended to be best at guessing middle cases — groups that actually make up around half the population, like the number of Americans that are Republican or Democrat, or married or single.

Experts say the reason we tend to overestimate the size of minority groups has to do with fear of the unknown — the majority hears about a group that isn’t like them, feels threatened and inflates the threat in their minds. Also, many only hear about minority groups through media portrayals or news reports that might exaggerate or fear monger, and the lack of personal exposure causes them to make inaccurate assumptions. For example, for all the media scrutiny over transgendered individuals, they represent just one percent of the total population (respondents to the survey guessed 21 percent).

Does having a better understanding of the actual demographic math make a difference for how we feel about them? Research suggests: not necessarily. But it’s certainly true that having an accurate view of the world instead of one made up in your head is never a bad thing.