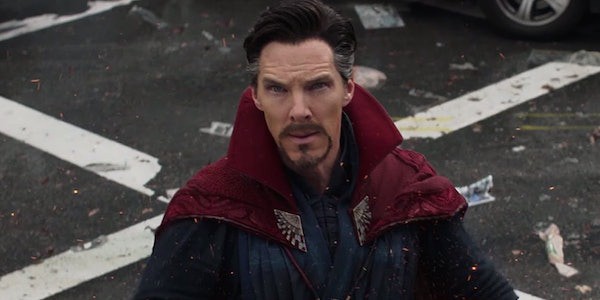 Every year, online biblical database Bible Gateway releases the year’s most searched terms and verses. Generally speaking, the most searched terms and verses stay more or less the same — stuff like “John 3:16” and “love” — but there are unique spikes in different words that swirl in and out of the pop culture zeitgeist. For example, last year saw a rise in searches for terms like “justice” that coincided with the Black Lives Matter protests. That’s why eyebrows were raised at this year’s fastest growing Bible search term: sorcery.

Searching for “sorcery” in 2021 was up 193 percent over 2020. Why? Well, there has been a bit of a witchcraft boom in recent years. The Chilling Adventures of Sabrina and Doctor Strange are both doing numbers. Maybe people just want to know what the Bible says about magic spells? Alas, a little digging reveals that’s not the case. Instead, this trend, like so many others, appears to be fueled by a conspiracy theory. People are turning to the Bible for confirmation of a noxious anti-vaccine talking point floating around on the internet.

To understand why, we need a short lesson in ancient Greek.

Bible Gateway noted that the spike was really motivated by an increase in searching for the Greek work pharmakeia. Bible Gateway’s content manager Jonathan Petersen used the Mounce Concise Greek-English Dictionary of the New Testament‘s definition of the word, which says it means the “employment of drugs for any purpose; sorcery, magic, enchantment.”

But the word has found fresh relevance for anti-vaccine conspiracy theorists, who say the word can be interpreted to refer to modern medicine (because pharmakeia = pharmacy. Get it?). In this very fringe framework, Paul is warning Christians about medicine, and vaccines in particular. Over at Religion News Service, Emily McFarlane Miller highlights the work of prominent anti-vax activist Sherri Tenpenny, who used pharmakeia to refer to modern health experts on a number of occasions over 2021. Tenpenny accused churches that host vaccination efforts of catering to “sorcerers” who are injecting “experimental genetic modification tools” into unwitting Christians.

“Our Lord would have never turned to the pharmakeia, the sorcerers, overlooking his father’s results,” she argued.

This sounds pretty conspiratorial, and it is, but it didn’t languish in obscure fringes of the Christian internet. Well-known Christian singer and former American Idol contestant Danny Gokey tweeted about it too, saying “The book of revelations [sic] mention how people won’t be able to buy or sell without getting the mark. I find it interesting how @RepSwalwell is helping push that agenda. It’s the beast system and will be propagated by fear and coercion. It’s dangerous and will turn people against and against God. The foolish and ignorant will run for it thinking they’re doing morally great things. Revelations also emphasizes how the whole world will be deceived by Pharmakeia.”

Kate Lechler has been a practicing witch for about 18 months. In an online exchange, she told me that she did not think many modern witches would link their practice to vaccines. Though she noted that she has been vaccinated against COVID-19, she said that “in my experience/understanding, I’d think that, as a community (though widespread and highly eclectic), we’d probably tend to be LESS aligned with vaccines and science and the pharmaceutical industry than the average person.”

“When it comes to science/medicine, there are certainly a lot of folks in the spiritual community who are kinda anti-science, anti-vax folks who believe that we can cure all manner of problems with spiritual methods,” she continued. “A less intense version of this would be people who are really into alternative medicine and herbalism.”

Daisy J. Hollands, who’s been practicing as a witch for about the same amount of time as Lechler, agreed. “Absolutely not,” she said, when asked if people in the witch community linked vaccines with their practice. “Not to my knowledge anyway.”

That wasn’t the only biblical term that saw a pandemic spike. Christianity Today also notes that Leviticus 13:45-46 saw the biggest year-over-year increase of any verse: “Anyone with such a defiling disease must wear torn clothes, let their hair be unkempt, cover the lower part of their face [emphasis ours] and cry out, ‘Unclean! Unclean!’ As long as they have the disease they remain unclean. They must live alone; they must live outside the camp.”

This passage saw a 626 percent climb over 2020, and you can probably guess why. Several medical and biblical experts pointed to it as proof that even in ancient times, God was mandating(!) health precautions, well before modern science could explain exactly why masking up might help keep people safe.

On Bible Gateway’s website, Petersen cautioned readers against taking Paul’s words about sorcery out of context. While sorcery—listed by the apostle Paul as one of the “works of the flesh” in Galatians 5:20—may have been an exceptionally popular Bible search term in 2021, it’s important to remember Paul’s instruction also in that chapter that’s summed up in the #27 most popular verse this year (up from #44 last year): Galatians 5:22 — “But the fruit of the Spirit is love, joy, peace, patience, kindness, goodness, faithfulness.”

The Spiritual Side of Sleep