One of the chief anxieties about the upcoming election is that, in the event of a close call, violence could break out around polling stations, near the White House or in other politically charged contexts. Both President Donald Trump and his Democratic rival Joe Biden have voiced concerns about political violence — though they both expressed concerns about the other side’s proclivities for it. And as it turns out, they both kind of have a point.

The number of Americans who believe political violence might be justified has shot way up over the last three years. Notably, there’s no huge discrepancy between political parties. Just eight percent of both Republicans and Democrats said their party was justified in using at least a “little” violence back in 2017. Today, that number has shot up to 33 percent of Democrats and 36 percent of Republicans. 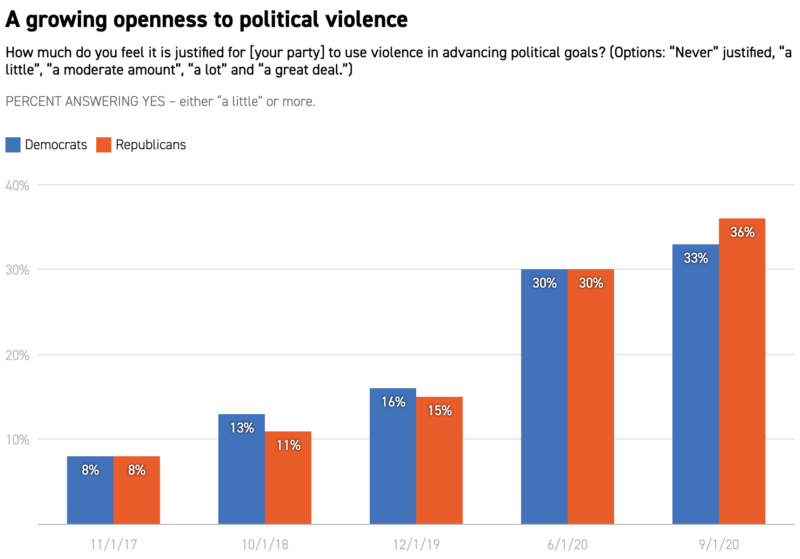 Unsurprisingly, the more ideologically partisan you are, the more you tend to think violence might be justified. The numbers of people who think a great deal of political violence is justified were higher among those who identified as “very conservative” (16 percent) or “very liberal” (26 percent). Just seven percent of voters who said they were simply “conservative” or “liberal” said political violence would be very justified.

The study’s authors cautioned that just because someone says they think violence is justified doesn’t mean they’re ready to take to the streets with a gun. There’s a big difference between thinking something is justified and actually doing it. But they also caution that the trend is worrisome and unfortunately, it only takes one person deciding to take matters into their own hands for tragedy to strike, as we saw with Kyle Rittenhouse earlier this year. Portland and Louisville have also seen partisan clashes, with leftwing protestors laying siege to state buildings in Portland and rightwing protestors storming Michigan’s state capitol building.

Here’s the, Uh, Timely Trailer for the COVID-19 Documentary ‘Totally Under Control’