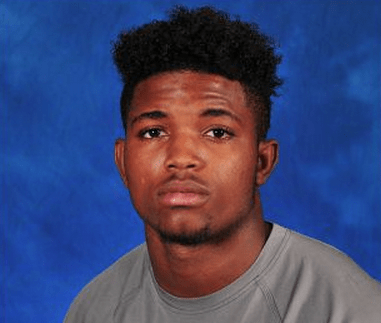 The police officer who shot and killed unarmed 19-year-old Christian Taylor while responding to a reported burglary at a car dealership has been fired. Details of the shooting are not totally clear, though security camera footage confirmed some of the early reports. Officer Brad Miller was responding to a 911 call about the Angelo State University player who had driven a vehicle through the showroom doors, after kicking out the windshield of a car on the lot. The moments before the shooting weren’t on the video that was released, but authorities say Taylor refused to surrender and some sort of confrontation transpired. Miller is white, and Taylor was black. The officer was not wearing a body camera. According to the Dallas Morning News, Arlington Police Chief Will Johnson offered this account of the interaction:

Johnson said at one point, Taylor and one officer talked to each other on either side of locked glass doors at the showroom. The officer said he told Taylor to surrender. Instead, Taylor held up a set of keys and said he was going to steal a car, police said.

In statement, Johnson said, “Officer Miller exercised inappropriate judgment by entering the building alone [and that] created an environment of cascading consequences that produced an unrecoverable outcome.”

Jeb Bush Will Be Among Colbert’s ‘Late Show’ Debut Guests