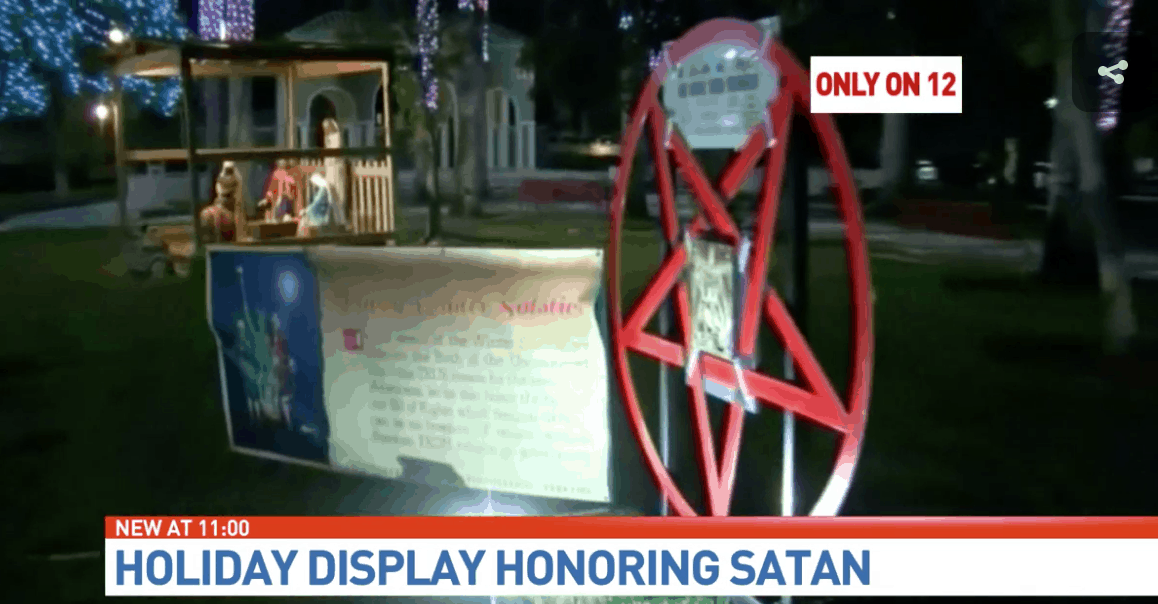 It’s that time of year again: Families come together; homes are adorned with twinkling lights; children excitedly make list of presents they hope to see under the tree; pastors in Florida openly threaten to smash monuments to Satan with a sledgehammer.

The latest “War on Christmas” dust up comes to us from Boca Raton, Florida, where the city will allow a 6-foot-tall, blood-red pentagram with the phrases “In Satan We Trust,” “One Nation under Antichrist” and “May the Children Hail Satan” to be erected in a city square. Ahh, the holidays.

An application from a local teacher and “Atheistic Satanist” Preston Smith was recently approved by city officials. A Boca Raton city councilmember told CBS 12, “This is not consistent with my particular values, but free speech means people have an opportunity to express themselves, whether government likes it or not or whether individuals like it or not.” The same teacher will also be erecting a “Freedom from Religion Nativity Scene.”

However, one local resident is taking his displeasure at the display to an entirely different level.

Pastor Mark Boykin, the Senior Pastor at Church of All Nations invited the  local news to his church to see the sledgehammer he is planning on using to smash the monument. He explained: “It’s evil. It’s the essence of evil. I will take the responsibility for taking the sledgehammer and knocking it down,” he said, also calling it a “welcome mat for Satan.”

“Satanic” groups have recently used the tactic of erecting monuments to Satan as a way of showcasing what they view as an unconstitutional favoritism toward Christianity by governments that allow nativity displays during the holidays. Many of them don’t actually believe in a literal Satan (or even the supernatural).

As the city’s mayor explained: “We can’t say no to this, as offensive as it is. Our lawyers said whatever you do, don’t do that. Because it will be an expensive lawsuit.”

’30 Rock’ Will Be Available on Hulu, For What It’s Worth

Hugh Hefner, the Founder of Playboy, Has Died