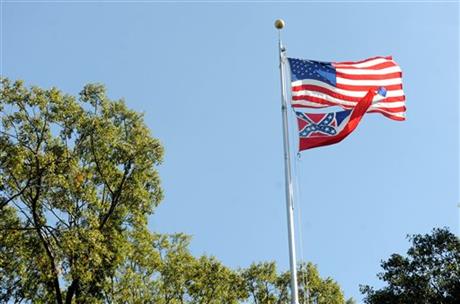 Earlier today, the University of Mississippi removed the Mississippi state flag from its campus because of the banner’s Confederate battle emblem. The university’s interim chancellor, Morris Stocks, announced his decision only after the flag was gone and placed in Ole Miss archives. For a long time, the state flag flew just under Old Glory near the university’s administration building.

“Because the flag remains Mississippi’s official banner, this was a hard decision. I understand the flag represents tradition and honor to some. But to others, the flag means that some members of the Ole Miss family are not welcomed or valued,” Stocks said in a statement.
The flag’s removal was prompted, in part, by Ole Miss’s student and faculty senates votes to urge administration to remove it from the Oxford campus.

Mississippi House Speaker Philip Gunn, an outspoken Christian, months ago called for the state to change its flag, but Governor Phil Bryant declined to call a legislative session to debate it. He maintains that Mississippians should decide for themselves the flag’s future.