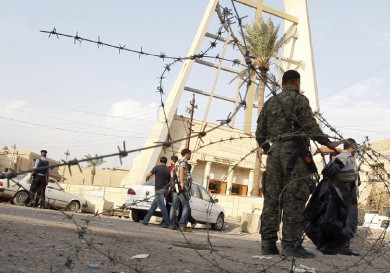 Remember the story of Jonah and the whale (or big fish)? Jonah was supposed to go to the city of Nineveh, which God saved after they repented. What’s not usually talked about is that Nineveh was in modern-day Iraq. In fact, Nineveh was just the beginning of a history of Christianity in Iraq.

Nineveh was the capital of Assyria, whose people adopted Christianity in the first century A.D. Since then, there has been a constant population of Iraqi Christians, most of them in an Eastern branch of the Catholic Church and the Orthodox Church. According to the U.S. Commission on International Religious Freedom, there were around 1.4 million Christians living in Iraq before the Iraq War started in 2003.

Since then, the Christian population has dwindled to around 500,000 and continues to get smaller as a new surge of violence against the Christian community threatens to stomp it out completely. In late October, an extremist group with ties to Al-Qaeda stormed a cathedral in Baghdad, leading to the death of 37 congregants and seven security force members. Attacks have spread into other parts of Iraq, including the Nineveh province in northern Iraq.

Sectarian violence has been a significant problem since the Iraq War began. Where Christians were once mostly accepted in Iraq, they are now often seen as having Western ties and as a general threat to Islam, the overwhelming majority religion in Iraq.

So what can you do? Pray for the Christians in Iraq. Stay up to date on news of persecution by checking out ICIN.org.uk or Voice of the Martyrs. Contact your representatives in Congress to express your concern and let them know true democracy allows for the full expression of any faith. Such efforts will show our Iraqi brothers and sisters they are not alone and that we are working on their behalf, even in the midst of persecution.

New Survey: All Our Spiritual Dialogue Isn’t Doing Much