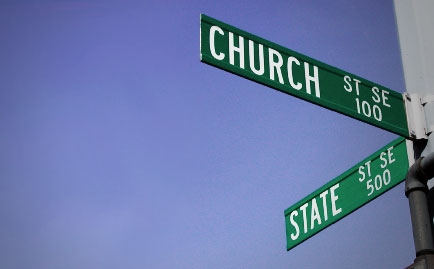 Political season should be a good thing. It leads up to an election, at which time we will appoint a leader who will unite our country and guide us as one united people for the next four united years. Right?

Sadly, the political world—especially leading up to an election—has devolved into something different. Yes, we still appoint a leader. But there’s not a lot of “united” happening.

Instead, there’s a lot of name-calling, side-choosing and vilifying. There’s a lot of “us versus them.” (If you need evidence, just scroll through any Facebook news feed anywhere ever.)

It doesn’t have to be this way. Our country may have two major political parties vying for our attention, but that doesn’t mean we have to pick a side, strap on our proverbial rifles and prepare for battle.

Instead, we should pursue the discussions and debates with respect and love. These are, after all, important conversations that will affect us and our neighbors. That’s why of all people Christians should avoid getting caught up in political jockeying and focus on the real issues that really matter. We need to think, not with red-or-blue shaded everything, but for ourselves. Here are a few reasons why:

It Lets Us Be Individuals

Diving in to political mob mentality robs us of any chance at individuality. When you have a group of people telling you how to think, you won’t think for yourself. Common sense, right?

But it’s such an easy trap to fall into. Again, we only have two major political parties in this country, and come election time, their primary goal is to beat each other. They want to win as many people to their respective sides as they possibly can.

It makes sense, and perhaps it’s a good strategy. But it doesn’t leave much room for individual thought. Many of us will side with one party over the other, but that doesn’t mean we’re going to agree with every single thing that party stands for. Maybe we will. But maybe we won’t.

And that’s the point. If we’re busy taking sides, there’s not a lot of time for forming our own individual political worldview.

Thinking for ourselves puts the power back on our side. It allows us to figure out how we feel about each important issue. And, more importantly, it gives us space to think about what we’re going to do about it.

It Lets Us Focus on Loving People

Does anything divide us more as a country than election season? Based on political views, people are made fun of, insulted, blocked, unfriended and generally disliked. It happens on both sides. There’s some cruel irony here. The right to vote, our chance to elect a leader to bring us together as a country, often pushes us apart.

And perhaps saddest of all, the Church is just as guilty of this as anyone. We go on the offensive all too often in the name of “fighting for our beliefs,” but we forget that the people we’re fighting against are the very ones we’re called to love. And it’s hard to love people while you’re trying to fight them.

Standing up for what we believe isn’t wrong. But when we become so consumed with political battles that we forget that the people on the other side are, ahem, people, we go too far. It’s possible to have beliefs—even strong ones—and still act lovingly toward people who disagree with us. As Christ-followers, it’s what we’re called to do.

Jesus was on earth during a time very different from ours. But was it, really? There are examples of this same kind of two-sided thinking all over Jesus’ story. Jews and Gentiles. Men and women. Tax collectors and … everybody else. And when Jesus encountered any of these people, what was His response?

When He was offered a choice of two roads to take, Jesus blazed His own path right down the middle. He touched lepers (Matthew 8:1-3). He loved a woman who other Jews rejected (John 4:1-26). He chose one society’s most hated people—a tax collector—as one of His 12 closest friends (Matthew 9:9-13).

Jesus didn’t spend His time worrying about whether or not His side would win. He loved people. That was it. When He had a choice, He would always choose to love. Even at the very end, when the world had decided to side against Him and nail Him to a cross, He still chose to love.