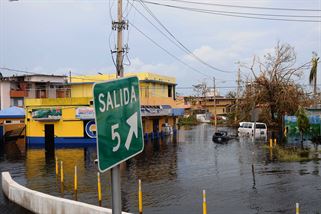 A Category 4 storm made landfall on Puerto Rico last month, leaving the island without power. While efforts being made to restore the island’s electric grid are having some success, experts are warning that the real challenges may have only just begun.

There is still a lack of access to safe drinking water, leading to preventable deaths. While the official death toll remains at 16, that number has not been updated and is believed inaccurate. According to Vox, CPI reporter Omaya Sosa Pascual has called each of Puerto Rico’s 69 hospitals to get their numbers on how many lives have been lost so far. She puts the death toll nearer to 60, with potentially many more on the way. And Los Angeles Times reporter Molly Hennessy-Fiske estimates that around 100 people have died in the Lajas region alone.

The simple fact is that local governments are struggling to keep up with the chaos, and have not had the resources to verify any accurate national estimated number of deaths.

“Sadly the island is so badly damaged that there is no ability to communicate—no way to know the number of people who may have been killed in the storm itself with houses coming down, debris,” founding director of the Global Resilience Institute at Northeastern University Stephen E. Flynn told Newsweek.

CNN medical correspondent Sanjay Gupta is reporting that doctors, strapped for electricity, are encountering multiple “preventable deaths” every day. Some people are unable to get medicine they need to survive, while older folks may be trapped in their homes with no way of communicating with the outside world. The Hill is reporting on some 5,000 people who need dialysis to survive—it is currently unknown what they will do if the fuel to power the generators runs out. And there are other, ominous threats, reports Gizmodo:

The EPA hasn’t been able to test the floodwaters for possible toxins and contaminants. Experts worry about mosquitos carrying chikungunya, dengue, West Nile, and Zika. And “more than half of the 3.4 million residents lacking access to clean drinking water,” according to POLITICO. Some worried about cholera, but the CDC “does not anticipate” cholera cases, writes Politifact.

It’s easy to be concerned about a national crisis in the days immediately following, but much harder to continue caring—and helping—in the weeks and months that follow. Unfortunately, Puerto Rico’s hour of greatest need may still be ahead, long after other Americans have moved on. If you want to continue to be involved in the island’s recovery process, here’s how to get involved.

5 Misconceptions About Feminism in the Church