In her own words, Janay Rice has lived a “nightmare.” She has suffered not only the assault by her then-fiancé, but cruel scrutiny after TMZ posted the videos of her terrifying experience online. How many have forgotten that she is a person? Some have stood up for Janay, validating her suffering and challenging the public to become better educated about domestic violence. Others have pointed fingers and debated questions Janay Rice (or any victim of domestic violence) shouldn’t have had to face:

1. What Did She Do to Provoke the Attack?

I don’t know Janay Rice or the nuances of her relationship with her then-fiance now-husband. But years of listening to victims, researching and advocating has taught me not to jump to conclusions. Domestic violence is lot like a hall of mirrors—What’s obvious doesn’t necessarily reflect reality. For example, swatting isn’t always aggressive. Experts say a victim may swat an aggressor in self-defense, to retaliate, and sometimes in anticipation of danger (a word, gesture or look).

But when an aggressor swats a victim—or knocks her out—he usually means to exert power and control in the relationship. There is a big difference when comparing motives. It takes a professional to figure out who is and is not the aggressor. Law enforcement weighs this when deciding who is at fault; in this case they charged Ray Rice for third degree aggravated assault. Nobody should have asked Janay Rice why her bulkier, stronger fiancé assaulted her, and there is never, ever a provocation that warrants assault.

2. Why Did She Defend Her Abuser?

Earlier this year, Janay sat beside her husband in a news conference when he apologized to Ravens owner Steve Biscotti, general manager Ozzie Newsome and coach John Harbaugh. He also apologized to “fans, to the kids, to everyone who was affected by this situation that me and my wife were in.” Many criticized Rice for not including his wife in the public apology. Domestic violence experts took issue that he spoke of Janay as an equal contributor to the violence, especially after charges against her were dropped.

It confused many when Janay admitted: “I do deeply regret the role I played in the incident that night, but I can say that I am happy that we continue to work through it together.” From the outside, it makes little sense why a victim stands by the assailant. But love and hope for change factors powerfully into the reasons many victims defend an abuser. Janay seemed to express this when she defended her husband: “I love Ray, and I know that he will continue to prove himself not only to you all but to the community, and I know he will gain your respect back in due time.”

Experts caution victims not to underestimate potential volatility and danger. Victims may also defend the abuser due to fear, coercion, threats, denial, shame, blame, economic necessity and events relating to the cycle of abuse. Only Janay knows the reasons for defending her husband. While some may have a healthy interest in her safety, judging her choices is disrespectful and inappropriate.

3. Why Did She Stay With Her Abuser?

A victim often stays with the abuser. She may tell herself the violence was a “one-time incident” and “it won’t happen again.” Usually an abuser has groomed a victim to believe she is to blame, and so she feels responsible. She believes that if she sticks with the relationship and keeps trying, the abuse will stop.

Cultural factors also play into her decisions. For example, ideal images of womanhood may cause her to suffer for the sake of her children having a father. Her faith may also factor into staying—trusting in God and the power of prayer, beliefs about forgiveness, and thinking that leaving isn’t an option. Typically, an abuser has isolated a victim from family, friends and finances, keeping her emotionally and economically dependent. She may not believe she can survive on her own; she may feel she has no options. The reasons victims stay are complex and numerous.

In recent months, many have dissected Janay’s decision to marry Ray Rice, and she has chosen to keep that private. In a recent statement, she asked the public to respect that: “Just know we will continue to grow and show the world what real love is!” Rather than asking questions, we would do well to pray that Janay and her husband have the resources for his rehabilitation as they rebuild their lives and build a new future.

How To Support Victims of Intimate Partner Violence

So what can we do to help? Here are a few ideas: 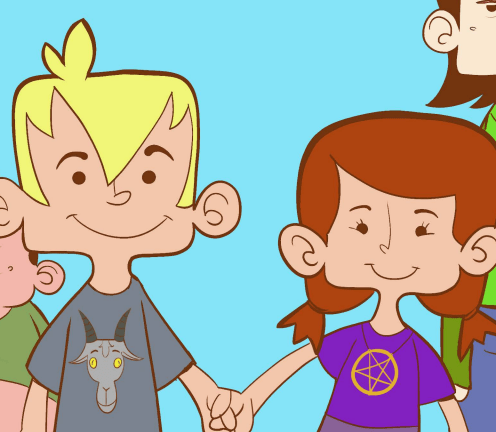 Satanists Handing Out Satanic Children’s Books or Something.

How the Church Is Helping in the Fight Against Ebola