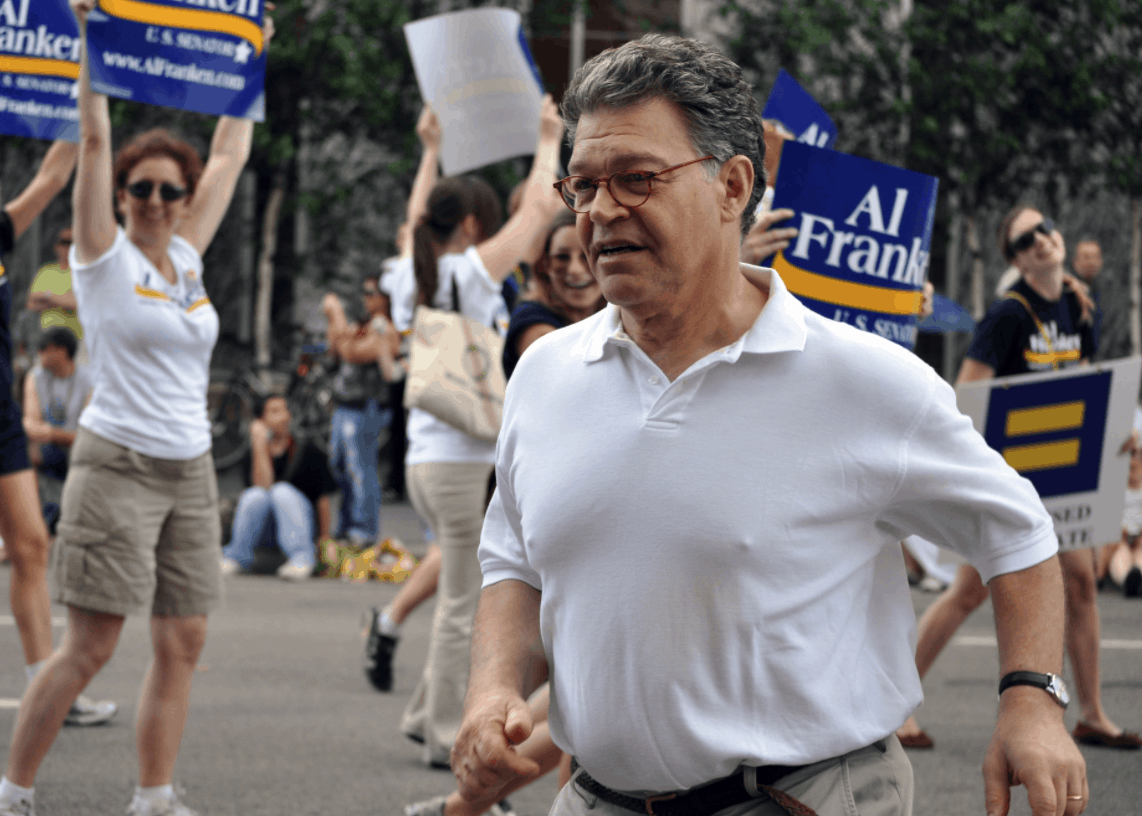 Sen. Al Franken of Minnesota, one-time comedian turned popular Minnesota politican, has been accused of some horrific acts by Leeann Tweeden, a news anchor on McIntyre in the Morning on KABC Radio in Los Angeles. In a lengthy post, she talks about working with Franken on a USO tour back in 2008. She says he wrote some skits for them to perform together, one of which involved a kiss which he insisted on “practicing” forcefully. In her words:

When I saw the script, Franken had written a moment when his character comes at me for a ‘kiss’. I suspected what he was after, but I figured I could turn my head at the last minute, or put my hand over his mouth, to get more laughs from the crowd.

He continued to insist, and I was beginning to get uncomfortable.

He repeated that actors really need to rehearse everything and that we must practice the kiss. I said ‘OK’ so he would stop badgering me. We did the line leading up to the kiss and then he came at me, put his hand on the back of my head, mashed his lips against mine and aggressively stuck his tongue in my mouth.

I immediately pushed him away with both of my hands against his chest and told him if he ever did that to me again I wouldn’t be so nice about it the next time.

But according to Tweeden, Franken’s acts didn’t stop there. Following the incident, she says she took care to stay away from Franken as much as possible. But it wasn’t until she returned home and was looking through some photographs of the trip that had been loaded onto a CD she was given that she saw a picture of Franken groping her breasts while she was asleep. The photo is posted in Tweeden’s original article.

I couldn’t believe it. He groped me, without my consent, while I was asleep.

I felt violated all over again. Embarrassed. Belittled. Humiliated.

How dare anyone grab my breasts like this and think it’s funny?

I told my husband everything that happened and showed him the picture.

I wanted to shout my story to the world with a megaphone to anyone who would listen, but even as angry as I was, I was worried about the potential backlash and damage going public might have on my career as a broadcaster.

But that was then, this is now. I’m no longer afraid.

In a statement, Franken said, “I certainly don’t remember the rehearsal for the skit in the same way, but I send my sincerest apologies to Leeann. As to the photo, it was clearly intended to be funny but wasn’t. I shouldn’t have done it.”

Tweeden explains that she felt empowered after a conversation with California Congresswoman Jackie Speier, who was forcefully kissed against her will by a colleague. Speier’s story inspired Tweeden to come forward with her own allegations. “I’m telling my story because there may be others,” she says. “I want to have the same effect on them that Congresswoman Jackie Speier had on me. I want them, and all the other victims of sexual assault, to be able to speak out immediately, and not keep their stories—and their anger—locked up inside for years, or decades.”

Embracing a Movie Ticket for One