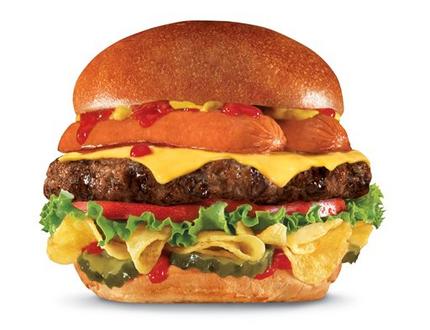 A patriotic new burger from Carl’s Jr. and Hardee’s has arrived just in time for summer. According to the Associated Press, the “Most American Thickburger” includes a beef patty with a hot dog on top. Before they close the bun—just to make we don’t miss out on some sodium—potato chips and condiments top everything off.

“The hot dog is like a smoked meat product, so it’s not unlike bacon,” Brad Haley, chief marketing officer of CKE Restaurants, told AP, just to clarify why we should be excited about the 1,030-calorie burger. So there you have it, starting May 20, $5.79 will buy you the latest variation of fast food’s obsession with meat-on-meat burgers. This one features something “not unlike bacon.” And this one is for America…

Around the World in 8 Prayers