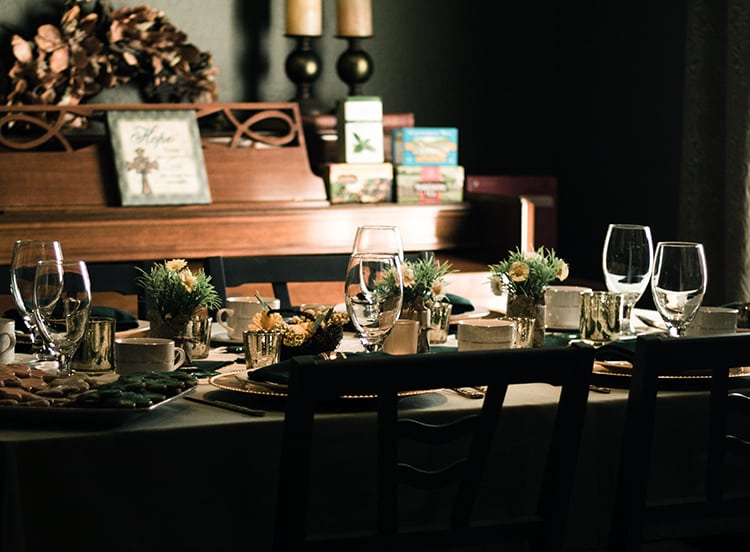 Thanksgiving. We reconnect with friends and family, break bread and share in a time of remembrance. The hardship of early American colonists and their peaceful rapport with the native tribes are baked into American culture like the pumpkin and apple pies we place on the table.

How easy it is to forget that just years after the “First Thanksgiving,” John Winthrop, the governor of Massachusetts, set into motion the massacre of Native Americans that would last for more than 200 years and nearly wipe out their population from what became the United States.

What can we do to reconcile our sterilized and mythologized version of Thanksgiving with what actually happened? And furthermore, are we even at liberty, as Christians, to celebrate it?

The harvest festival that’s become synonymous with Thanksgiving was actually a highly political affair, with little of the peaceful festivity we often think of. Most of what we know about the feast comes from a letter written by pilgrim Edward Winslow, whose remarks were summed up in Thomas Mann’s 1491:

“Winslow later recalled, most of [the Native Americans] with weapons. The Pilgrim militia responded by marching around and firing their guns in the air in a manner intended to convey menace. Gratified, both sides sat down, ate a lot of food and complained about the Narragansett.”

The perceived threat of violence from the settlers would soon become a reality. By some accounts, the genocide of Native Americans began in earnest in 1637, when the Pequot Massacre, led by Massachusetts Pilgrims, killed up to 700 men, women and children in a fortified village along Mystic River. The only survivors were a band of warriors outside the village.

A day of “celebration and thanksgiving for subduing the Pequots” was declared, to be celebrated henceforth.

While the Narragansett were allies to the settlers in the Pequot War, colonial encroachment on their lands eroded any hope of peace with the Pilgrims within a few short decades. By the 1800s, the people were denied status as an Indian tribe due to their mixed heritage.

What happened next is known to most in some small detail. Massacre, torture, rape, forced conversion and the deliberate spread of disease utterly devastated Native American populations by the 1900s, with indigenous tribes reduced by 98 percent in some areas.

Such systemic injustice is a form of “communal sin,” a grave mistake made by our Christian forebears. American Christianity is often quick to dismiss the concept, arguing in the vein of Deuteronomy 24:16 that we are not responsible for answering for the sins of our father.

Biblically, this view is extraordinarily problematic. As Rebecca Florence Miller suggests, to ignore these sins also means ignoring large portions of the Bible where the sins of a society are in fact the responsibility of that society as a whole.

In Matthew 11, Christ Himself harshly rebukes whole cities that have refused to welcome Him as the coming Messiah, declaring “it will be more tolerable on the day of judgment for the land of Sodom than for you.”

From racial injustice to the treatment of America’s indigenous cultures, responding appropriately means acknowledging that errors and even atrocities have been committed in order to create and maintain the way of life many of us enjoy. Yes, our Thanksgiving feast came, and to a degree still comes, at the expense of Native Americans’ culture. So what is the appropriate course of action?

Reconciling our concept of the “first Thanksgiving” celebration with the historical reality necessitates some response. Celebrating the holiday mindfully with friends and family is an admirable goal, but one that comes with its own set of questions.

An appropriate celebration of Thanksgiving with friends and family is a personal matter to be made with earnestness and open dialogue. It’s a deeply personal decision as well, based on the celebrants and the level of discourse that can be entertained. Discussing the atrocities that made the meal possible and celebrating the holiday with a mind toward those who suffer still while we give thanks is an excellent first step toward a Thanksgiving holiday that doesn’t rely on a false narrative.

Thanksgiving is also an opportune time to acknowledge pain and brokenness within the family. The feasts are often strained due to unresolved emotions and unsettled baggage, and often families don’t recognize that pain because it’s easier to pretend it’s simply not there. Just as we remember the pain that the first Thanksgiving may represent, we can also remember that celebrating behind a facade of pleasantness doesn’t bring much-needed healing. It’s easier—but it’s not honest.

Finally, we can make strides toward celebrating the first people in the Americas by commemorating their sacrifices in our Thanksgiving feasts. Making a Native American dish or reading a traditional prayer can commemorate without treading into cultural appropriation. Making a new tradition of taking a collection to send to a reservation for indigenous people  every Thanksgiving would also be a small reminder of the indigenous people still living (and often suffering) among us.

When giving thanks to God this Thanksgiving for the many blessings He has given us, remember that our feast was bought with a great cost. Taking a moment for sober reflection on what that means is precious little to ask for the bounty we receive.

Rick Perry: Trump Is ‘the Chosen One’

The New Trailer for ‘Onward’ Takes Pixar Into the Unknown