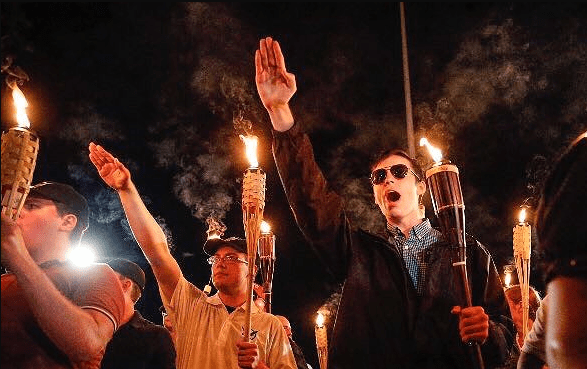 Pearce Tefft is a Fargo, N.D. man whose son, Peter, was prominently featured over the weekend’s white nationalist/Neo-Nazi/KKK march in Charlottesville.

Peter was interviewed, his picture made its way online and he was eventually identified by online sleuths. Now his father has penned a heart-rending letter which he posted on Inforum in full.

In it, the elder Tefft rejects his son’s “vile, hateful and racist rhetoric and actions” and says he has tried to teach all his children that “all men and women are created equal.” He says his son’s new beliefs represent a “twisted worldview.”

Pearce also draws a biblical allusion, saying “my son is not welcome at our family gatherings any longer. I pray my prodigal son will renounce his hateful beliefs and return home. Then and only then will I lay out the feast.” The letter ends on this truly tragic note.

He once joked, “The thing about us fascists is, it’s not that we don’t believe in freedom of speech. You can say whatever you want. We’ll just throw you in an oven.”

Peter, you will have to shovel our bodies into the oven, too. Please son, renounce the hate, accept and love all.

It’s a powerful reminder of the ugly divisiveness of hate, and the impossible positions it forces some families into. You can read the whole thing here.