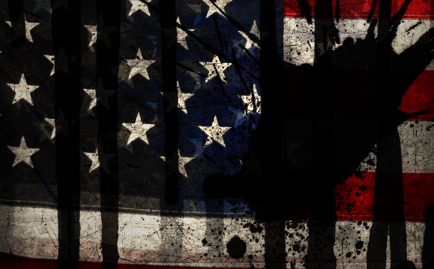 I am thankful to live in a country that acknowledges people have rights to “life, liberty and the pursuit of happiness,” and that empowers citizens to influence how they are governed. I know how rare such freedom has been throughout history, and how costly it has been to acquire and protect. I’m also proud of many other ideals America stands for, such as the principle that all people are created equal (though, we’re obviously still in the process of living up to this one). So, I see no problem with an American Christian being patriotic.

At the same time, followers of Jesus need to be very careful. History shows us how easy it is for Christians to forget that the Kingdom Jesus came to establish is “not of this world” (John 18:36, TNIV). And it’s to His Kingdom we are to pledge our sole allegiance.

Throughout history we find Christians buying the age-old pagan lie that God uniquely favors their country, and their national enemies are God’s enemies. Believing that lie, patriotic Christians have tragically followed the orders of earthly rulers and marched into battle “for God and country,” rather than following the example of Jesus—who gave His life for the people who persecuted Him.

Ironically, in some cases the “enemies” Christians have slaughtered have been other patriotic Christians who happened to be born in other countries, or other parts of the same country. Few things have done more to discredit Christianity than the patriotic zeal with which Christians have participated in violence.

“Whoever claims to live in him,” John teaches us, “must live as Jesus did” (1 John 2:6). When we compromise our commitment to living and loving like Jesus, we’ve crossed the line between healthy and idolatrous patriotism. Jesus and Paul repeatedly command us to love, bless, pray for and do good to our enemies, and to never retaliate or resort to violence. It’s healthy to patriotically appreciate the positive aspects of our country and our form of government. But we’re putting that patriotism in front of God the moment our allegiance to our country motivates us to kill our enemies rather than to die for them. And anything in our lives that comes before God is idolatry.

The danger of idolatrous patriotism is not just about how we compromise our love for enemies. If we become too invested in our nation, we can forget our real citizenship is in heaven (Philippians 1:27) and our job is to live as ambassadors of Christ ( 2 Corinthians 5:20). Rather than manifesting the distinctive values of the Kingdom of God, we can begin to assume the ideals of our culture are Kingdom values.

I appreciate that America recognizes my rights to “life, liberty and the pursuit of happiness,” but there is nothing distinctly Kingdom about these rights. They’re nowhere to be found in the Bible. To the contrary, as a follower of Jesus I’m called to surrender my rights to life, liberty and happiness, and instead submit to the will of God. These rights are noble on a political level, but they can get in the way of my call to seek first the Kingdom. I’m grateful America extends these rights to people, for most countries throughout history have not. But my sole allegiance is to the heavenly Kingdom that calls me to surrender my rights. If I get too concerned with an earthly country that frees me to pursue my rights, my healthy patriotism becomes idolatrous. I’ve put my country’s ideals before God.

Along similar lines, history consistently shows when we forget we’re “foreigners” and “exiles” in this world, we can begin to associate our preferred form of government or politics too closely with the Kingdom of God. Here, too, it’s crucial we follow the example of Jesus.

Despite the fact that He lived in an age when plenty of political and nationalistic issues were being hotly debated, Jesus never displayed the slightest interest in such matters. He didn’t come to bring us a “new and improved” version of the Kingdom of the world. He came to inaugurate a Kingdom that is “not of this world.” It’s a Kingdom that is no more Israeli than it is Palestinian; no more American than it is Iraqi; and no more socialist than it is democratic. Instead, it’s a Kingdom that encompasses people from every nation and political persuasion, for it puts on display the “one new humanity” Jesus died to create (Ephesians 2:15). In this Kingdom, Paul declares, there is no longer any Jew or Greek (Galatians 3:27-29). In our Kingdom, all national, tribal, ethnic, gender, social and economic distinctions are insignificant.

So over the Fourth of July weekend—and all year—be appreciative of your country. Be patriotic. But make sure your patriotism pales in comparison to your sacrifice, commitment and allegiance to the Kingdom of God.

How We Can Help Haiti the Right Way

Make Your Own Yogurt