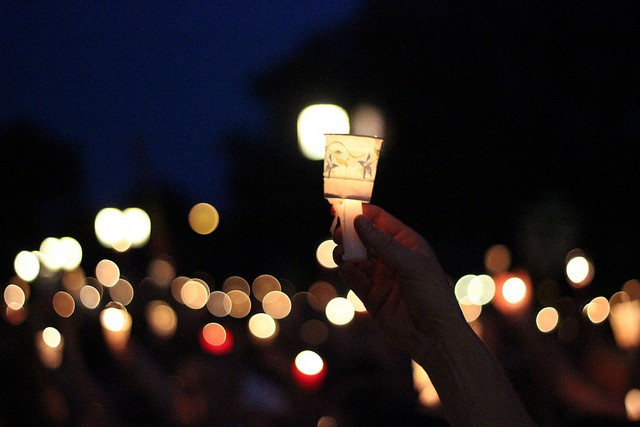 Around the country, people are mourning. As a national community, we are attempting to make sense of the massacre Sunday morning at Pulse nightclub in Orlando, Florida. Cities all over hosted formal and informal gatherings and vigils to show solidarity with and compassion for victims and their families.

In Orlando, thousands of people gathered downtown in front of the Dr. Phillips Center for the Performing Arts. A church bell tolled 49 times, once for each of the victims of the tragedy. About 10,000 people attended the vigil where the speakers included Orlando Mayor Buddy Dyer, Imam Muhammad Musri, president of the Islamic Society of Central Florida, and Neema Bahrami, the manager of Pulse (who announced that the club would reopen). The Orlando Gay Chorus sang songs of strength and solidarity.

“We can’t wait to show the world that joy and love conquers hate. Hate will not define us. Hate will not defeat us,” Dyer said. He also announced the One Orlando Fund, a nonprofit created by the city of Orlando. According to Time, the fund had already raised more than $700,000 from local businesses in its first few hours.

In Boston, hundreds of people attended a vigil held by Mayor Martin Walsh outside of City Hall. Attendees signed a condolence book and pride flag that will be sent to Orlando in solidarity.

The state of Colorado held several gatherings, with the largest being in Denver at Cheesman Park.

In Baton Rouge, Louisiana, legislators held a vigil at the state capitol with the governor and other politicians. In New Orleans, a group gathered at a church near the French Quarter to pray for victims and their families. The group represented multiple faiths and included a candlelight ceremony where each victims’ name was called.

Thousands gathered at the famous Stonewall Inn in Manhattan, New York City, to support and memorialize the victims. New York Governor Andrew Cuomo and Mayor Bill de Blasio both spoke, in addition to other elected officials.

In Vermont, Bernie Sanders attended a vigil with more than 1,000 people to show solidarity. The vigil also included a half-mile march in Burlington. Sanders also spoke at the vigil briefly.

There have also been reports of gatherings around the world, in places like Paris and London. Several cities here in the U.S. will continue to hold their upcoming Pride celebrations with tighter security and what they’re calling small adjustments.

How to Grieve Well

God, Tragedy and the Orlando Shooting