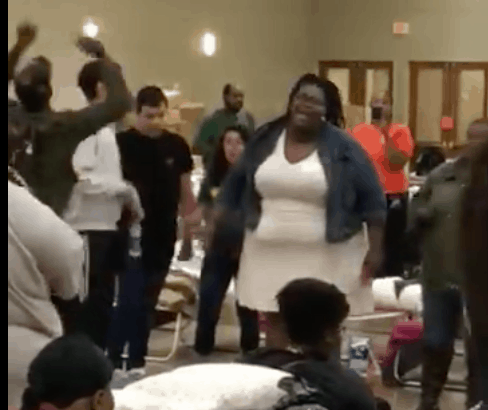 This week, the Lone Star Convention and Expo Center just north of Houston has housed people across the area as floods ravaged the region.

One of the people seeking shelter in the building captured a moving scene, when a local woman named Victoria White began leading others in the singing of gospel songs. So far, it’s been viewed nearly 10 million times.

Y’all, THE GOSPEL IS GOING VIRAL!!! This blows me AWAY (and that’s no easy task)! I had no idea this was being recorded, but God had a plan! Not only did He want to Love on those gathered in Lonestar Expo Center who suffered loss at the hands of Hurricane Harvey, but He wanted to love on people across the world who were dealing with their own personal storms!!!

She also encouraged viewers to get out and help those suffering from the effects of the massive storm:

Get out and SERVE if you can! If you’re in the Houston area and you can get out…..GO SERVE those who were impacted the most by this storm! If you’re in California, or New York, the Carolinas or Alabama – there is SOMEONE in your community, in your state, in the world who needs something you have…..GO SERVE!!! Let this video be a reminder that you can use whatever gifts and resources, big or small, to bless someone else!

You Shouldn’t Have an Opinion On Everything