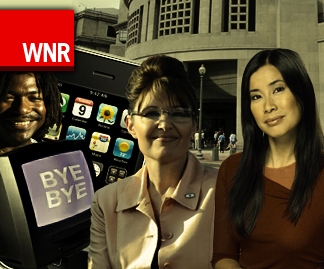 This week saw tragic acts of violence, talk show feuds and a bizarre find at sea. It was a week in which the world appealed for mercy for the imprisoned, saw a new iteration of a status-symbol gadget and watched the last television broadcast in analog. All this and more defined the second week of June, 2009.

Tragedy struck on Wednesday when 88-year-old white supremacist James von Brunn entered Washington D.C.’s Holocaust Museum with a rifle, and fatally shot security guard Stephen T. Johns. Von Brunn was injured when other guards returned fire, and was taken to the hospital in critical condition where he was formally charged with murder the next day.

Von Brunn has a long history of hatred toward Jews and African-Americans, and ran a website where he wrote anti-Semitic diatribes, spun conspiracy theories and denied the Holocaust. Those close to von Brunn say he seemed to be preparing himself for a violent end in the weeks before the shooting. Apparently, von Brunn was frustrated with his living situation and complained that his social security benefits had been cut, claiming it was due to his white supremacist views.

Florida Fisherman Reels in a Missile

A commercial fisherman plying his trade (a phrase we’ve always wanted to use, but never before had the opportunity to) in the Gulf of Mexico reeled in an interesting find. It was a corroded missile from an F-15 fighter jet. Note to crab fishermen everywhere: That’s the deadliest catch. Officials at Eglin Air Force Base said that the missile carried no explosives, but still dispatched a bomb squad to dismantle the projectile. Sounds a little suspicious. The fisherman asked to keep the missile after it was dismantled, but apparently the Air Force had a problem with that. It’s important to note that as the fisherman retells this story in the future, the missile will become larger and larger.

David Letterman isn’t exactly in the business of making friends with politicians and celebrities, and he’s sent more than a few people off his show in tears. However, Letterman made a definite enemy this week in Sarah Palin when he made some off-color jokes about Palin’s daughter. Palin fired back, essentially calling Letterman a perverted old man.

In response, Letterman issued a sort-of apology, saying he regretted making jokes at the expense of Palin’s daughter. He added, though, that he’s regretted thousands of his jokes and said he still thought some of the shots he took at the governor were pretty funny. He also invited Palin to be a guest on his show. That should go well.

As of today, analog television goes the way of 8-track tapes, leaded gasoline and Gary Coleman’s career. Thousands of televisions will go to static as every signal switches to digital. An estimated 2 percent of viewers aren’t ready for the switch, and will spend today ineffectually beating on their sets and adjusting the wire hanger that’s serving as an antenna. For those who are prepared, they won’t notice a difference other than the fact that According to Jim looks remarkably vibrant and clear. Of course, Jim Belushi still won’t be funny. There are some things digital signals can’t fix.

Two reporters working for Al Gore’s Current TV news network were detained by border guards in March when they strayed into North Korea from China. Laura Ling and Euna Lee, who were reporting on sex trafficking in China, have been sentenced to 12 years of hard labor for an unspecified “grave crime” and illegal border crossing. Secretary of State Hillary Clinton has appealed to the North Korean government for clemency, and said the administration was “engaged in all possible ways through every possible channel to secure their release.” Ling and Lee’s families made a joint statement, apologizing on their behalf to the North Korean government if the two had accidentally strayed across the border, and calling for compassion. A troubling aspect of the situation is that Ling and Lee cannot appeal their decision, as it was made in North Korea’s highest court.

At the Worldwide Developers Conference in San Francisco, Apple unveiled the new iteration of its iPhone, and dropped the price to $99. The new iPhone will come in 8, 16 and 32 gig models, and will capture video. It also allows users to download rented videos, and has a feature that will track and locate the phone if it’s stolen. The phone keeps getting cooler and cheaper, but it still doesn’t have the feature we’ve been dreaming of: a button that causes it to dispense canned cheese.