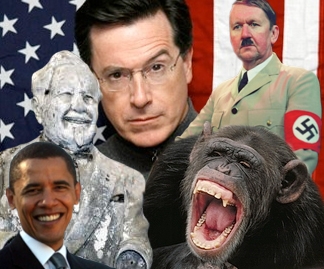 Once again, here’s your weekly roundup of the news shaping your world. From the culture-shaping to the just-plain-bizarre, the second week of March was an interesting one.

President Obama has lifted former president Bush’s ban on federal funding for stem cell research. Defending the controversial move, Obama said the White House will now make scientific decisions “based on facts, not ideology.” High-profile supporters of the decision include former first lady Nancy Reagan and Parkinson’s-striken actor Michael J. Fox. Opponents object to the move on the grounds that human embryos are destroyed in the process.

Colonel Sanders Statue Retrieved After 24 Years in a Japanese River

Back in 1985, a group of Osaka baseball fans threw a Colonel Sanders statue into the Osaka river. Why? Because he loosely resembled a player from their team. It all makes perfect sense. Unfortunately, Osaka’s baseball team began a losing streak at that moment. The team hasn’t won the national title since, and many place the blame squarely upon “The Curse of Colonel Sanders.” It’s well known that the chicken magnate constantly promised to wreak vengeance from beyond the grave on anyone who defiled his graven image. Well, not well known, but we assume. At any rate, the statue was dredged from the river this week, mostly intact and still smiling. Hopefully Osaka’s team will have better luck from now on, now that the powerful fried chicken cabal isn’t working against them.

Saddleback megachurch pastor Rick Warren has launched a new magazine called Purpose Driven Connection. The magazine, published by Reader’s Digest and overseen by the executive who launched Oprah’s magazine, O, contains articles about the Warrens’ rebuilding efforts in Rwanda, the religious awakening of a former Khmer Rouge leader and transcripts of Warren’s presidential inauguration prayer and leadership forum with President Obama. Though the first issue features Warren on the cover, publishers have promised that Warren won’t always be the cover figure (unlike Oprah on the cover of O). Moreover, the magazine is targeting subscribers who will use the mag for small groups rather than newsstand appeal. Time will tell if the risky venture pays off for Warren.

Stephen Colbert has rallied the Colbert Nation to try to get a new module of the international space station named after him. NASA is running an online ballot to decide the name of the new room, and Colbert asked his viewers to write in his name. Thus far, Colbert is winning. Unfortunately, the contest rules dictate that NASA doesn’t have to abide by the results. What’s the fun in that? No wonder no one’s interested in space travel anymore. If they’re not going to name a room after Colbert, the least they could do is have a sentient computer onboard that goes crazy and tries to kill all the astronauts. Come on, NASA! Get your head in the game!

Nazi Guard Arrested in US

An 88-year-old retired auto worker in Ohio has been charged with 29,000 counts acting as an accessory to murder for his alleged role as a Nazi guard at the Sobibor death camp. John Demjanjuk faces extradition to Germany where he would stand trial for the crimes. Demjanjuk claims he was not a guard at Sobibor, but rather a soldier in the Soviet Army captured as a prisoner of war. He was previously extradited to Israel in 1986 when it was believed he had been a ruthless torturer at the Treblinka death camp, but he was cleared of the charges.

In a story that should absolutely horrify you, a chimpanzee in a Stockholm zoo has stockpiled rocks to throw at visitors in a blind, human-hating monkey rage. Fortunately, his aim is horrible. Watching him ineffectually hurling bits of concrete and miss by a mile is much like watching Shaquille O’Neal try to make a free throw. According to researchers, this proves that animals have the foresight to plan for future events. What the researchers didn’t add—but was tacitly understood—was that this also proves that chimps will one day kill us all.

The Church and Domestic Abuse

Worship in the Skatepark