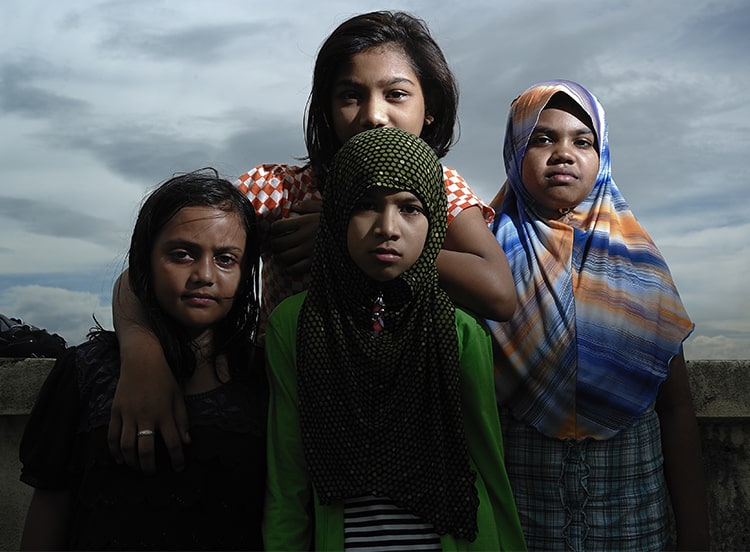 In a period of 10 weeks, 624,000 refugees have fled Myanmar for Bangladesh. These are known to some as the “Rohingya” people (a term that is problematic for some, even offensive, according to some sources), a Muslim minority population centralized in Myanmar’s western state of Rakhine. The Buddhist-majority Myanmar government has been working to rid the nation of all Rohingya, from the people’s culture, to their history, to the population itself.

The United States has declared the state’s military campaign to be ethnic cleansing. Conflicts surge in both Myanmar and Bangladesh, with neither country seeming to want to offer a home to the Rohingya people. Now, they are practically stateless, forced to live in a stricken sort of no man’s land between the nations.

The political and social climate of the region is extremely complex, but humanitarian efforts are underway to help people in need in both Myanmar and Bangladesh. It’s a delicate situation for aid groups in the area focused on relief efforts.

“This has been the fastest-growing refugee crisis in the world,” says Drew Clark, World Vision’s senior director of emergencies. World Vision is a Christian humanitarian aid organization operating in both Myanmar and Bangladesh. “The numbers have been overwhelming. Most people are arriving with just what they can carry.”

The most urgent point of crisis for organizations like World Vision is the displacement of the refugees themselves. They’re ending up in rudimentary refugee camps with little to no shelter, and many of the displaced people face a complete lack of amenities and resources.

Additionally, Rohingya refugees still in Myanmar are relegated to conditions some have described as ghettos or internment camps. Those imprisoned cannot access school or health care. Across the Rakhine region, the number of persons interned is near 120,000. While they struggle for survival, their homes, mosques and villages are ravaged by the state military.

“A lot of organizations like World Vision that are trying to help face a lot of logistical challenges in getting to these remote areas where the refugees are,” Clark says. “The priority beyond that immediate safety is the basics: access to food and water, shelter over your head.”

To meet the refugees’ needs, World Vision is focusing its response so far on providing basic food supplies like rice, sugar, oil and salt. The refugees might be trying to survive in areas that are already impoverished or wanting for resources, so provisions begin at the foundational level.

There’s a psychological impact, too. Refugees are being forced out of Myanmar amid some traumatic situations, Clark says. Their villages may have been burned, for instance, or they may have witnessed violence in their homeland.

And going back isn’t an option for the Rohingya. Myanmar’s security forces are working to erase “all signs of memorable landmarks in the geography of the Rohingya landscape and memory in such a way that a return to their lands would yield nothing but a desolate and unrecognizable terrain,” according to an October report from the Office of the United Nations High Commissioner for Human Rights.

“For people of faith, we really appreciate prayers. [The refugees] will need security and time to heal. It’s something we can be mindful of,” says Clark.

The rights violations against the Rohingya are extending beyond displacement. Their culture is being erased from memory in Myanmar. Teachers and other cultural educators are being targeted by the state, and the mere existence of the Rohingya is being treated as “fake news” by government leaders.

Beyond prayer, Clark says the most urgent need for organizations responding to the crisis is donations. It helps places like World Vision provide supplies to those in need.

“It will have the most immediate impact on people suffering today. Even if it’s only a little bit, it can be really powerful at a scale when lots of people are aware of the crisis and engaging with it. We can be more effective when people are able to donate to help us provide the basic things that people need.”

There’s a Drake Video Game, And You Can Play It Right Now

US Abortion Rates Continue to Plunge to Historic Lows