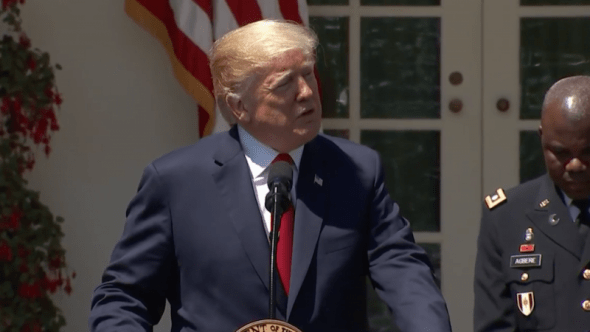 In part, the order reads: “The executive branch wants faith-based and community organizations, to the fullest opportunity permitted by law, to compete on a level playing field for grants, contracts, programs and other Federal funding opportunities.” (h/t Christian Post)

Yeah, that’s a lot of jargon, but maybe Trump’s words will clarify: “The faith initiative will help design new policies that recognize the vital role of faith in our families, in our communities and our great country. This office will help ensure that faith-based organizations have equal access to government funding and the equal right to exercise their deeply held beliefs.”

Alright, so it seems the office will serve as a place where the federal government can advocate for the religious freedom of certain organizations, if we look at the words of the order and of the president.

There are critics of the order. Americans United President and CEO Rachel Laser said in a statement Thursday that this is “one more attempt by Trump to redefine religious freedom to mean the freedom to discriminate against those who do not share your religious beliefs.”

So the concern here is over things like, perhaps, what we might call the “wedding cake” debate, in which a Christian-owned cake company can refuse business to people whose ceremony might not fall into a Christian idea of marriage. Same conversation, different framework.

‘Wild, Wild Country’ and the Delusion of Finding Yourself