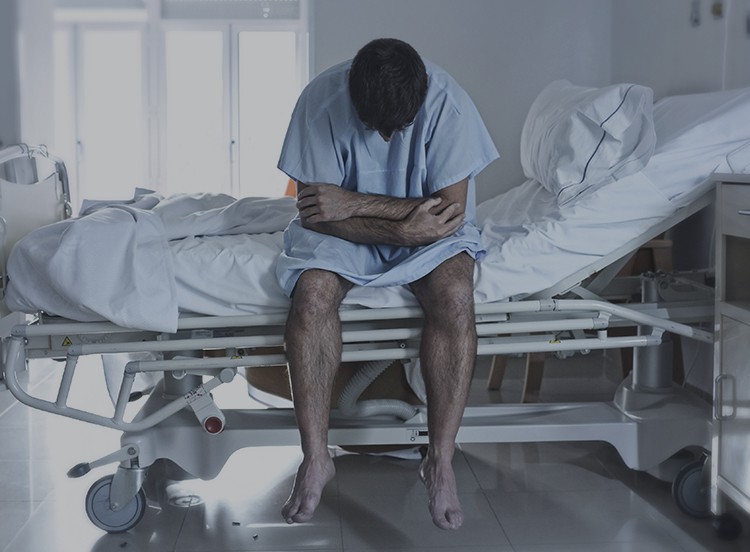 I put the black eyeliner on thick and a little lopsided, above and below my eyelids. Then I started braiding my blonde hair into small intricate braids, as that of the great Viking women who went into battle with their men. Nothing was going to stop me. I was a Viking woman and I was going to fight until my last breath. I looked at myself in the mirror with great glee and screamed at the top of my lungs, my war-cry. Running around the house like a mad Wonder Woman, with Kendrick Lamar’s “DNA” up as loud as I could get it, I did a wild dance, kicking and screaming at my imaginary foe. It was probably quite a sight to behold, but I didn’t care. My heart was racing and I felt like I could conquer the world.

Had I gone mad? Maybe. But mostly it was because I really was in the fight of my life and I needed that inspiration to keep on fighting. Months before, in an empty hospital hallway, I learned that my young, 35-year-old, vegetarian, ran-five-miles-a-day, never-sick-a day-in-his-life husband had Stage IV colon cancer. So if I needed to run around the house pretending to be a crazy Viking woman for some inspiration to keep on going, that is what I was going to do.

You can never be prepared for that moment, when the doctors tell you something that changes your life forever. You see it in the movies. You know it happens to people. Maybe something like this has happened to your best friend’s aunt or your colleague’s father but not to you. Right? What are the chances?

It started with my husband feeling sick and constipated. He had been having some irritating pain in his lower stomach area for a few months, but he was seeing a naturalist and taking care of it. One day the pain was too uncomfortable and I convinced him to go to the local CareNow.

They did a quick X-ray and said that, out of caution, they wanted to get a CT Scan. Not too concerned, we went and did the CT scan with no problems. A few hours later they called us back and told us that he had a blockage. We needed to go to the hospital immediately. We headed to the hospital. The ER was the first time we heard the word “possible tumor” blocking his GI system. They didn’t want to scare us. We were still OK. We would have to stay in the hospital for a couple days but they would take care of it. No worries.

We got up to our room and he was finally stable on pain and nausea medicine. A physician’s assistant peeked her head in the room and I mentioned that I had not spoken with a doctor yet. I told her that there was a suggestion of a possible tumor and wondered if anyone could give me more details on the situation. I was getting a little frantic. She quickly squashed my fears and said I had nothing to worry about; She was sure the ER doctors were just being cautious. I sighed a big sigh of relief.

An hour later the PA pops her head in the room and asks to speak with me outside. Her voice is shaking and she looks worried. As I took each step, I felt panic rise in my chest. As she was speaking, saying words like “multiple tumors on his liver,” “possible liver cancer” and “tumor markers,” I felt weak in the knees. Time seemed to slow down and her words became long and deep. Suddenly she sounded like the teacher in Charlie Brown.

I thought maybe if I kept saying no, somehow, maybe I could change it. No. No. This can’t happen. This isn’t happening. This isn’t happening. My mom held me as I cried and flailed. She spoke words like a nurturing mother hen, none that I can remember now, but were meant to soothe. I could see it in her face too: the disbelief, the horror, the sadness. We sat on the dirty bathroom floor for a while in silence, taking it all in. Holding each other.

It wasn’t until days later that we received the official diagnosis, Stage IV Colon Cancer that had moved to the liver. Days later I had to sit down and explain to my husband what was going on. He was so doped up on pain meds that he didn’t really grasp what was happening. The first words out of his mouth when I asked if he had any questions was… “I’m so sorry we have to stop trying for a baby, but please don’t worry, we will figure it out.” Not worried about himself, but about me. I felt my heart swell with love.

So why do I tell you this story? To depress you? To help you see your life isn’t that bad? No, because you need to know that this is not just a one in a million story. This is just one of many. Many people have been called out into the hall to hear bad news from the doctor. People all over America have to wake up and fight cancer or some other horrible illness every single day, whether they feel like it or not. Yet, we are forgotten. Our Congress has decided we are not worth fighting for anymore.

My husband and I are both employed, college educated, hard-working individuals who contribute to our society both economically and as worship leaders within our own community church.

However, because we are only part-time employees and self-employed, we do not get insurance through our employer and pay for access to health insurance through the marketplace. In our case, it has saved our lives and we are thankful for it every day. In 2013, when I had to resign my full time job and became very ill, I was able to see a spine specialist, psychiatrist and psychologist to get the help I needed. A year later because of this help, I was back working again.

As a self-employed full-time professional musician, my husband had decided that he would never have health insurance. It just wasn’t in the cards for him. When the Affordable Care Act came around, he signed up, three years before his cancer diagnosis. Without the Affordable Care Act, we would be bankrupt right now, even with the abundant generosity of friends, family and our church along the way.

I know that it isn’t perfect. So let’s fix it.

Many people, including my own senators, say they are Christ followers, yet in the same breath will complain of “those people” who get things they don’t deserve. I always wonder about these Christ followers and if they have read the same Scriptures as I have.

Many Christ followers are very clear on the first commandment: to love God with everything they have, but seem to be unclear about the second, to love your neighbor as yourself.

It is clear in the Gospels that we should help those that are less fortunate than us. Yet, many Christians fail to see that healthcare, literally healing the sick, is just that. We have a chance to be the kind of country that works for the good of all, or the kind of country that only cares for the few. We can have a “survival of the fittest” philosophy or we can be guided by the principles of our Constitution that every human matters.

In the New Testament, James was always very concerned about what faith actually meant lived out in the real world. He writes, “What good is it, my brothers and sisters, if someone claims to have faith but has no deeds? Can such faith save them? Suppose a brother or a sister is without clothes and daily food. If one of you says to them, ‘Go in peace; keep warm and well fed,’ but does nothing about their physical needs, what good is it? In the same way, faith by itself, if it is not accompanied by action, is dead.”

My husband and I are scared. For awhile today, I sat and ugly cried and wailed, asking God what we were going to do if they took our access to healthcare away. Not only do we have to deal with fighting this disease every day, we have to be anxious and worried that our healthcare might be taken away in mere months. We have been talking in the last couple weeks about going ahead and making the leap: having a baby. Even knowing that he may not see the next year, but we have wanted it for so long, why stop living our life when facing death? But knowing that I might not be able to be hired if pregnant, if I needed to get a full-time job to keep our healthcare, makes us pause.

We don’t know how long he has left. It could be a year or maybe more. We do know that every day we will get up and do everything we can to make this life count.

When I feel down about his diagnosis, he always lifts me up and reminds me that we have the present and that is all we really need.

We have been told there is no hope for remission at this point. We have to keep fighting it and hope for the longest possible outcome.

This is not what we have hoped and prayed for but we believe that God has plans for us, “plans to prosper you and not to harm you, plans to give you hope and a future” (Jeremiah 29:11). We live in that hope and know that time is the greatest gift of all.

So, no matter what, I have to keep putting on my Viking warrior woman eyeliner and go to war with cancer every day. It is an indomitable foe but it cannot take our spirit or our principles. Until his dying breath, I will fight for him and we will continue to try and live out those principles we believe. We will love our neighbor, even those we don’t agree with, and hope that they see us as worthy of this precious life.

are worship leaders in their local United Methodist Church in Denton, TX. J.R. was diagnosed with Stage IV Colon Cancer in November 2016 and they have been fighting ever since.

A Kid Found a 4,000-Year-Old Fidget Spinner on Display in a Museum

It’s Official: CBS Will Kill Off the Wife on ‘Kevin Can Wait’ So Leah Remini Can Join the Cast