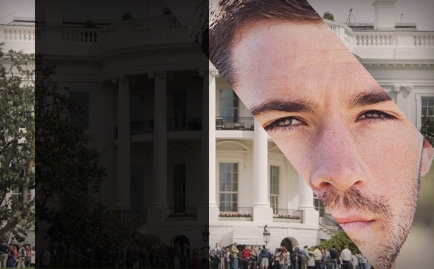 EDITOR’S NOTE: Like any election year, as 2012 progresses, political discussions will intensify—especially among Christians. For believers,there are always complicated questions of faith and policy, how oneaffects the other and when the two should be held separate. But whilethe questions might be the same, the answers people have are oftendifferent. Which is why RELEVANT is taking a few weeks to ask Christians ofvarious political backgrounds to describe how they arrived at theirparticular view and why they vote the way they do. We’ve already heard from a Christian Libertarian, Christian Republican and a Christian Democrat. Now, C. Christopher Smith shares how the model of Christ’s incarnation leads him not to vote.

“America, it may be, is doing very well upon the whole, notwithstanding these antics of the parties and their leaders, these half-brained nominees, the many ignorant ballots, and many elected failures and blatherers.”  —Walt Whitman

Whitman’s words ring as true today as they did when he penned them over a century ago. And although my rationale may differ from Whitman’s, I think these words get to the heart of why, for almost two decades, I have chosen not to vote.

Let me begin with the caveat that I don’t condemn people who vote. Rather, I simply believe voting is not the most important political practice of the Church—and I am part of a church community where a few of my brothers and sisters share this conviction.

My opposition to voting is rooted primarily in the narrative of Christ’s incarnation. Jesus was born and lived in a particular time and place; the kingdom He proclaimed did not seek to overthrow the Roman Empire and re-order society from the top down. Instead, He sought to reenergize the grassroots social order of YHWH begun in Ancient Israel, a locally embodied polis that functioned most healthfully without a king. Jesus called 12 disciples, a little community that recalled the 12 tribes of Israel, and they shared life together in a way that proclaimed God’s healing and abundance to the people they encountered.

After Jesus’ ascension, His disciples spread throughout the world planting little communities that embodied Jesus in their own particular places. These churches were, in a very real sense, the incarnation of Jesus in these places and the shape of their life together modeled a politics—a way of being together—that was not rooted in greed, power-grabbing or any form of self-interest. (If you want to know more about politics embodied in church communities, I suggest you read John Howard Yoder’s little book Body Politics.) This basic incarnational story of Christ and the Church is the one in which I and my brothers and sisters at Englewood Christian Church on the Near Eastside of Indianapolis find ourselves.

Our main political task, as a local church community, is to follow the mission of God in the church and thus to embody Jesus faithfully in our place and to work with our neighbors toward the health and flourishing of our neighborhood. Whitman’s assumption that there are more important political realities in our land than our elected officials rings true for me. According to theological narrative I have defined here, churches are the most important of these political realities, but also more important is the open dialogue and collaboration of neighbors as they seek to cultivate their places in such a way that they flourish and can be sustained. To invest ourselves in this political work is a viable alternative to voting, and perhaps more effective in shaping the future of our places.

To talk of politics from the narrative of Christ’s incarnation, and the continuing incarnation of Christ in our churches, is to emphasize that our most important political sphere is ultra-local, the care and flourishing of our neighborhoods. The United States as a nation, and probably even our states as well, are too large in their scope. Whitman’s scathing critique is leveled not at individual voters and politicians, but at a broken system in which the candidates who run for national offices are too far removed from us. We cannot know in any deep and meaningful sense who they are and what they represent. On the flip side, they cannot have intimate knowledge of all the places they represent and what is in the best interest of each of these places.

In our age of mass media, we may have more information available about each of the candidates, but that does not mean we will know their character any better or what stances they will take under pressure of their elected roles. Many people voted for Obama, for example, because he promised change from Bush’s big-military and big-business policies. Disillusionment set in eventually as Obama did little to tone down the American wars in the Middle East and was very friendly to big business, using taxpayers’ money for instance to bail out floundering banks. Is it also not peculiar that we often know more about Romney, Obama and others clamoring for office in Washington than about the neighbors on our street?

Whitman got it right, I believe, that nominees are necessarily “half-brained,” limited in their capacity to know the vast diversity of their constituents and the places they inhabit. Candidates are thus also condemned to the blathering of propaganda, masking their lack of knowledge with empty campaign promises in order to win votes. And yes, candidates are ultimately condemned to failure as the complex power-dynamics of office unmask their inability to truly fulfill those promises.

Despite our best efforts to the contrary, voters likewise act out of limited knowledge—Whitman’s “ignorant ballots.” We don’t really know who candidates are and how they will survive the massive pressures exerted in governing such a large domain as a state or nation. Political parties fill in some of these gaps for us, offering us a basic platform on which a candidate might be understood, but their “antics”—to use Whitman’s word—mostly serve at the present to devour our political identity and to ignite division.

No, our primary identity as the Church is in Christ, and not a political party. Many who hold a similarly incarnational theology do vote; it is not an either/or proposition. On the other hand, I intentionally submit to the discipline of not voting, as a sign of hope that the Kingdom of God will flourish and mature in the midst of our church communities. This discipline also serves to remind me of the depth of our call into the very political work of discerning and sharing life together with our neighbors in a way that bears witness to God’s reign.

C. Christopher Smith is editor of The Englewood Review of Books, and author of the recently released ebook The Virtue of Dialogue: Conversation as a Hopeful Practice of Church Communities. He is also co-writing a book entitled Slow Church (forthcoming IVP/Likewise).

The Salt of the Earth (and Chocolate)

Greece Bailed Out for Second Time by EU