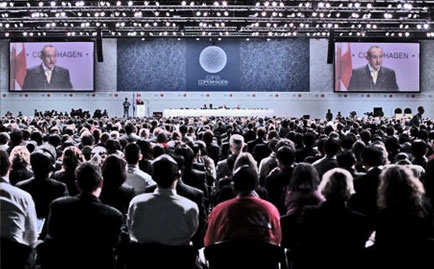 As the global climate summit begins in Copenhagen today, the world’s attention is focused on the prospects for international agreements to cut carbon emissions. Although participating leaders have already said they won’t pass binding, long-term treaties, they hope to lay out short-term steps that set the stage for broader solutions next year. Regardless, the negotiations can jump-start long-stalled efforts to alleviate an ecological and humanitarian catastrophe that hits the world’s poorest people first and worst.

Christians who believe God commanded them in the beginning to be good stewards of His creation—and sent His son who taught His followers to love their neighbors as themselves—have a special obligation to treat climate change as a pressing moral issue.

The facts about the effects of climate change on the poor are staggering. Oxfam America reports that their regional offices in poor regions around the world are already observing the spread of waterborne diseases, falling agricultural productivity and water availability, and increases in flooding and drought. The near future is ominous as well—according to the Evangelical Environmental Network, crop yields in some African countries could fall up to 50 percent by 2020. Since 70 percent of Africans are small-scale farmers, this threat is especially severe. This looming threat of famine and poverty simply cannot be ignored.

Although climate change is already happening, steep emissions reductions can blunt the extent of global warming, and a great deal can be done to help people adapt to their increasingly volatile environments.

The world’s attention is understandably focused on the heads of state participating in the Copenhagen summit, but it’s important to also consider the comments U.N. Secretary-General Ban Ki-moon recently made to religious leaders who gathered at Windsor Castle to discuss climate change in the lead-up to Copenhagen.

“The world’s great faith communities occupy a unique position in discussion on the fate of our planet and the accelerating impacts of climate change,” he said. “You are the leaders who have the largest, widest and deepest reach.”

There is a great challenge implicit in the Secretary-General’s remarks. Christians and other religious leaders have been taking on climate change for years in their congregations and in public advocacy, but as a global summit promises only incremental change and climate legislation stalls in Congress, those of faith need to redouble their efforts.

Political leaders in Washington and around the world are making the case for fighting climate change through important measures such as curbing emissions, creating green jobs and supporting renewable energy. But one issue consistently gets left out of the public conversation: climate change’s disproportionate impact on the poor. One of the most important things the faith community can do is lift up this critical issue and strive for solutions that take into account the devastation faced by brothers and sisters around the world who contribute least but are impacted most.

As people of faith, Christians can continue to be a voice of conscience as the president determines the commitments the U.S. will make at Copenhagen this week and the Senate debates climate change legislation in the coming months. Passing a bill that includes significant funding for projects that help vulnerable communities adapt to their changing environment can make a life-saving difference for people around the world.

In the South Pacific, climate change is devastating communities in a variety of ways, such as increased coastal erosion, powerful storm surges and cyclones, soil salinization and flooding. In order to survive, they’re cobbling together defense mechanisms and adaptation strategies—getting around by canoe when their lands flood, moving families at lowest elevation to higher ground, and gardening in pots rather than in the soil. But they need more sustainable (and more expensive) solutions to cope in the long term.

In other parts of the world, drought-resistant seeds can help farmers safeguard their livelihood and food supply in drying areas, such as the Sahel region of Africa. Coastal barriers and early warning systems can protect areas subject to increased flooding, such as Bangladesh. Mosquito nets and improved public health facilities can save lives in areas that will become more vulnerable to malaria as precipitation patterns change.

But all these measures cost money, and political leaders need to know these are urgent moral issues worthy of addressing. They need Christians support to do the right thing. If Christians don’t speak up for the most vulnerable in the midst of this debate over complicated national legislation and international treaties, who will?

Climate change can be remembered by future generations as a great calamity that Christians could not summon the moral strength to stop, or as a great challenge everyone worked together to overcome. One of these is certainly preferable—and also pleasing to God, who gave His children the world to tend and preserve.

What do you think about climate change? What are your hopes for the Copenhagen talks?

Katie Paris and Dan Nejfelt work for Faith in Public Life. They also work with Day Six, a campaign to demonstrate to U.S. political leaders that people of faith support climate change legislation that includes significant funding for international adaptation programs to help save communities and lives around the world.

Where the Kingdom Rubber Meets the Road