New research from Gallup shows that, with only 44 percent of Americans having “a great deal” or “quite a lot” of confidence in religious institutions, Americans’ trust in church is at its lowest point since the national research organization started asking the question in 1973.

“The efforts of churches will matter, but thousands of congregations trying harder isn’t going to reverse the trend,” says David Kinnaman, president of Barna Group, a research organization that focuses on the intersection of Christianity and culture. The data that was released by Gallup reflects what Barna has been recording from American churches for years. “There needs to be a deep movement of God. Trends are very hard to reverse without major shifts.”

At 56 percent, Protestants are more confident in religion than Catholics, who register 46 percent. However, both numbers took a major dive in 2002 after discovery of the Catholic church’s response to child molestation cases.

The rest of Americans have only a 29 percent rate of confidence.

Hemant Mehta is an outspoken atheist and author of I Sold My Soul on eBay: Viewing Faith Through an Atheist’s Eyes, a 2007 book about his thoughts from attending and objectively critiquing several churches. The research from Gallup confirms what he’s observed anecdotally, and blogs about on his website, friendlyatheist.com. Much of the culture outside of Christianity sees faith as being represented by older icons.

“If you ask young atheists who the influential Christians are, they don’t say Rob Bell, they say Pat Robertson,” he said.

Mehta admits that, though Christianity is a diverse faith, Christians do get lumped together.

“I do whatever I can to highlight groups that call out other Christians,” he said. “We have Christian friends and they’re awesome. The church as an institution, not so much. A lot of younger Christians are fading away fast. If a church wants to keep growing and spreading their message, they should at least listen to what they (disenchanted Christians) have to say.”

Despite his disbelief, Mehta does say this his experience taught him that churches have something to offer.

“I witnessed a kind of community that was amazing,” he said. “It would be really hard to leave that, even if you did have doubts. If you’re sick or have an emergency, they take care of you.”

The Gallup research indicates that American confidence in all societal institutions in general are at all-time lows, although confidence in religion has declined more quickly than others. Kinnaman had observed the same.

“Culture is becoming more tribal,” he says. “Among those confident in religion, they’ll become more confident and increasingly find their identity there, but the same is true for people who are skeptical. They will find their identity in skepticism. There will be more accentuation, more starkly defined terms of debate.”

And Kinnaman expects the trend to continue.

“A lot of researchers and sociologists say nothing is changing, that religion is the same,” he says. “When there’s a 33 percent drop in confidence, that affects a lot. It’s naïve of us to say nothing has shifted. We don’t need to talk people into religion, but we do need to talk them into Jesus and that’s going to be affected by their skepticism.”

Churches are aware of the trend, Kinnaman says, and many have adopted a more missional mindset, especially in the last five years.

“Churches are becoming more outwardly focused,” he said. “They’re asking themselves, ‘would people even notice if we weren’t here?’”

The missional movement includes pastors and speakers like Hugh Halter, who is involved in the Verge and Sentralized Conferences. The Verge conference in Austin, Texas began in 2010. The first year sold out three weeks in advance with more than 2,000 attendees and nearly 3,000 people from 11 countries engaged online via live stream. The message is simple, yet the speakers hope it will spread: a focus on Christ and an emphasis on everyday people spreading the message simply by living alongside those who aren’t believers.

“It gives an alternative to people,” Halter said. “It’s kind of a redo of Christianity and the ethos behind it.”

Time will tell whether or not it’s the alternative America needs.

Rebecca is the religion reporter at the Tyler Morning Telegraph in Tyler, Texas. 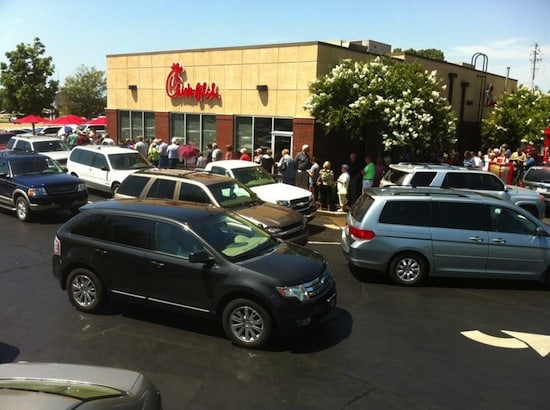 Why Men Can't Have It All