In a recent interview with The Hollywood Reporter, actress Natalie Portman explained that she does not display her Academy Award statuette in her home:

“I don’t know where it is. I think it’s in the safe or something. I don’t know. I haven’t seen it in a while. I mean, [director] Darren [Aronofsky] actually said to me something when we were in that whole thing that resonated so deeply. I was reading the story of Abraham to my child and talking about, like, not worshipping false idols. And this is literally like gold men. This is lit­er­ally worshipping gold idols—if you worship it. That’s why it’s not displayed on the wall. It’s a false idol.”

We as Christians—those who through Jesus Christ have “turned to God from idols” (1 Thessalonians 1:9)—know that forsaking the practice of idolatry isn’t merely about keeping “gold men” off of our display cases. More important for us, of course, is to destroy the idols set up on the interior shelves of our hearts. Nevertheless, holding to standards like Portman’s “no Oscar statuette” statute can prove wise and sensible, so long as such rules remain of second importance to obeying actual God-given commands.

Certainly, people in our culture seem less prone to worship visible, concrete objects than did ancient pagans. Well, aside from time-demanding flat-screen televisions, Siren naked bodies streamed on the computer screen and the potential “shrines to the self” known as mirrors—OK, maybe we’re not so different.

Still, our most prevalent idols tend to express themselves more abstractly: social status, career success, romantic pursuits, material wealth, the “perfect family,” etc. So, while we should typically fear more the deadly power of less concrete idols, the avoidance of physical “carved images” (Exodus 20:4), even an Academy Award, can be useful.

For instance, if you’re prone to worship the idol of personal success, then you probably should not lay the foundation stone for a would-be Temple of Me by finding an eye-catching place to store your trophies and plaques.

As another example, consider the guy whose happiness seems to rest entirely on the performance of his favorite sports team or player. This guy might be guilty of something like hero worship of the athletic variety (a very forthright expression of contemporary idolatry). His functional savior and messiah does not walk on water but on green turf. He cannot conceive of reaching ultimate bliss apart from his hero and his apostles (teammates) earning a winning season. In order to overcome hero worship, it might be best that this guy not decorate his apartment with team-shop memorabilia.

What Is an Idol?

Physical objects can actually cause people to become more inclined to certain types of idolatry already embedded in their hearts. Thus, Portman’s philosophy of household décor is not as “surfacey” as it might seem.

In the starkest of terms, an idol is anything that you count either by belief or behavior as more ultimate than the true and living triune God of Scripture. We are guilty of idolatry when we succumb to anything other than God for our sense of dignity, purpose or identity.

And we are all prone to worship something other than God. This is what it means to be a sinner.

So, Portman’s choice to put away her award makes a lot of sense. But it is not enough merely to avoid idols. Something else must become more attractive to us; something must beat out our idols in the battle for our affections.

This is why we must contextualize and personalize our application of the command “You shall not make for yourself a carved image.” We must look to that which is greater than our idols to dispel our attraction to them.

The Second Commandment itself comes contextualized in its initial appearance in the Bible. According to some biblical scholars, the prohibition against “any likeness of anything that is in heaven above, or that is in the earth beneath, or that is in the water under the earth” doesn’t forbid replicas of every kind (Exodus 20:4-5; Deuteronomy 5:8-9). After all, Israel’s tabernacle and temple were to include art pieces and other furnishings that resembled created things (see Exodus 25:31-40; 1 Kings 7:18,25,36).

The practice of the peoples surrounding Israel, however, sheds light upon the nature of the Second Commandment expressed in its original form. In ancient Near Eastern culture, the placement of an idol at a particular location declared that god’s rule over a given area. Further, idols through various rituals were thought to mediate the presence of the gods they represented. Thus, the prohibition that Yahweh gave to Israel not to make and use carved images as their neighbors did was a corrective to wrong thinking about the divine.

The Heart of Idolatry

Human beings cannot come to God by making a physical representation of Him. We cannot manipulate His presence by means of handcrafted objects. Instead, God must come to us on His own terms and His own timing.

And God did (Galatians 4:4-5). He who was eternally intangible became tangible eternally (John 1:14). Although He was in the form of God, He took on the form of a servant (Philippians 2:5-8). God the Son took on a human nature to become the one and only mediator between God and man, the man Christ Jesus (1 Timothy 2:5).

Because He is fully God, Jesus alone can satisfy us in ways that our idols cannot, giving us true dignity, purpose and identity. Because He is fully man, Jesus alone can grant us the forgiveness, cleansing and delivery we need from our idolatries. While it might be a good idea to look away from the gold man, this is not enough. We must heed the good news and look to the God-man.

How to Poison Your Marriage in 3 Easy Steps 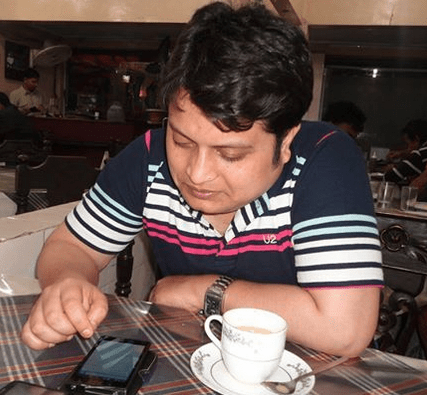 Another Blogger in Bangladesh Has Been Murdered for Criticizing Religious Extremism