I’ve always disliked Abercrombie & Fitch. Perhaps it’s because their price point was beyond what my parents would spend for me in high school. Or maybe because I spent half of high school attempting to dress like a Roxy model—and the other half dressed like Kurt Cobain. There’s also the pretty good chance that I simply have an aversion to smelling like a high school boy fresh from the showers when I leave the store. I am a girl, after all. Whatever the reason, I was never a fan.

So when CEO Mike Jeffries’ comments on the exclusionary practices of his brand were recently leaked, my dislike turned much more sour than it already was. A&F doesn’t carry any size above a large for women, though they carry both XL and XXL for men. Why? “Candidly, we go after the cool kids … A lot of people don’t belong [in our clothes], and they can’t belong,” as Jeffries said in a 2006 interview with Salon.

It’s unacceptable to devalue human beings based on body size, skin color, or high school cafeteria status. My point here: Please don’t mistake this post for having any support for their company. I have none.

Because I’m a social worker with the homeless population of Skid Row, multiple people sent me this youtube clip and urged me to take and hashtag pictures with the #FitchtheHomeless if I saw any Skid Row locals wearing A&F. “Homeless people are getting clothes AND Abercrombie & Fitch are being sent a message!” one said, assuming I would be totally ecstatic about the idea.

Sure, donating clothes to the homeless is great. Raising awareness about A&F’s misconduct—also great. My problem however, lies in the undertones of the other message: that homeless people are the lowest of the low and therefore adorning them in A&F is the quickest, easiest way to stick it to CEO Mike Jefferies. Not to mention, this campaign implies that homeless people are needy and therefore should and will wear whatever we give them and be thankful. It seems to say: I won’t wear this garbage, but they should, in order to prove my point because they fit the proper stigma to do so.
I am not OK with this. If a point has to dehumanize men and women to be made, it’s a point not worth making.

I can understand many of Garber’s ideas, but they were delivered at great expense. I urge you to also think of the “other” here. The one who is a man or woman, a human being, without a home, and not just a social cause. People God calls us to love well. And people who have become my friends, and have modeled for me who Christ is in a way that I’ve never found in any other avenue of my life.

I can’t imagine any other people group where exploitation for the sake of tweets and Instagram pictures, as this project’s social media call-to-action requests, would be acceptable. Can you imagine? “We’re going to pass out these clothes to Asian people only, to stick it to this guy! We’ll show him! He’ll be so mad Asians are wearing his clothes!”

So perhaps we should lend the same courtesy to the residents of Skid Row. Instead of foisting a campaign on them as human props to prove a point, let’s consider donating things they may actually need and want.

There’s been a lot of speculation, arguments and “responses” to the #FitchtheHomeless campaign.

And acknowledging how emotionally invested I am in this situation, I thought it might be best for me and for us all to hear and learn from the people whose opinion on this really matters. I decided to show some of the people I work with the video and write down—unfiltered—what was said. Here’s what I heard:

“Why the h*** would he pass out clothes to us that he said date rapists wear?”

“I’ve seen my nephew wear that brand of clothing and he’s not a date rapist.”

“It doesn’t look like he is explaining what he is doing to anyone he is giving clothes to. That’s not right.”

“Why isn’t he talking to people when he gives them the clothes? I hate it when people who think they are do-gooders act like that.”

“Why did he just give that large man those tiny pants? I thought he just said they don’t make those sizes? That doesn’t seem very helpful at all.”

“He’s not even asking if he can film them, does he think this is a zoo?”

“Why would we want our ‘own brand of clothing?’ Especially clothing he said ‘douche bags’ wear.”

“I’m not interested in being this guys billboard or social cause, unless it’s to get people homes.”

“We may be homeless, but that doesn’t mean we want to wear ‘douchey’ clothes to prove a point—what purpose would that serve, to dehumanize us even more than we already have been?”

“If someone walked up to me to take a picture of me to put on the Internet, I would be really pissed off.”

But the comment that I think sums up everything that needs to be said, was made by a woman who sat quietly through the whole video, before simply stating, “Well, that sort of hurt my feelings.”

I don’t believe that Greg Karber began this project in malice toward the residents of Skid Row. But that does not change the reality that this project is attempting to protect one people group while hurting another. That’s not charity. And I have to believe that there must be a better way—the way of true charity, which is simply the way that respects and upholds the human dignity of all people, to the exclusion of none. 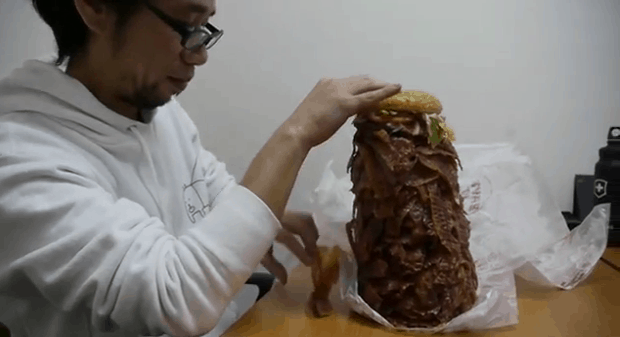 I Will Take One Whopper, with 1050 Pieces of Bacon, Please