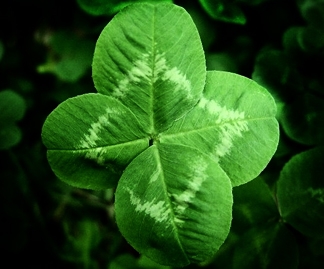 St. Patrick’s Day is the national holiday of Ireland, which celebrates Saint Patrick, one of the patron saints of Ireland. In the United States, the day is widely celebrated. The Chicago River is dyed green, and there’s the well-known parade in Boston, the longest-running Saint Patrick’s Day celebration in the U.S. Many people will celebrate by wearing green, the color most widely associated with Ireland.

A popular symbol of Ireland and St. Patrick’s Day is the leprechaun. In Irish mythology, a leprechaun is a type of male fairy. Along with hiding pots of gold at the end of rainbows, leprechauns are said to bring good luck. The Notre Dame Fighting Irish mascot is a leprechaun. Apparently his luck ran out. Notre Dame was defeated by West Virginia in the Big East Tournament, and knocked out of contention for the NCAA Basketball Tournament.

So with St. Paddy’s Day here and thoughts of leprechauns in my head, I got to thinking about luck. What is luck? Does it really exist? We’re all aware of “good luck charms” like a rabbit’s foot, necklace or four-leaf clover, which are said to bring good fortune. Some people have a “lucky number” or a “lucky dress.” We’ve heard phrases like, “It’s better to be lucky than smart.” Is Friday the 13th really an unlucky day? If a black cat crosses your path or you open an umbrella inside your house, will that bring bad luck? If you find a horseshoe or a penny heads up, will this bring good luck? Is any of this stuff for real? What’s the deal with luck?

“Luck” is defined as “an unknown and unpredictable phenomenon that causes an event to result one way rather than another.” Luck refers to that which happens to a person beyond their control. If something happens to your advantage, it’s “good luck.” If it results in something negative, it’s “bad luck.”

Science does not support the concept of “luck,” and instead says “luck is probability taken personally.” In other words, science holds that everything that happens to you is simply a matter of numerical odds. A brick falling on a person walking is not a function of that person’s “luck,” but is instead the result of a collection of explainable occurrences. Statistically, every person walking near the building was just as likely to have the brick fall on them. Anything can happen to anybody, but when it happens to you, an added significance is applied and you seek some explanation for it or apply some concept to it, like luck.

The concept of luck relates to circumstances. People hope for “good luck,” which implies something positive happening, and fear “bad luck,” which is equated with some unfortunate occurrence. The entire mentality is based on the fallacy that our well-being is contingent upon our circumstances.

Christians sometimes share in this fallacy by living as if their peace, security, identity, worth, identity, purpose, contentment and fulfillment are determined by circumstances. The value of God is seen in His ability to influence life’s situations for the good or offer protection from adversity or misfortune. One of the most common forms of prayer is asking God to intervene and change our circumstances. We often equate God’s “blessing” with things going our way.

Jesus continuously pressed people to see that the source of their deepest desires was not outside themselves but inside them. Jesus announced that God’s kingdom had come. Listening bystanders began looking around befuddled. Jesus said they needed to look inside themselves to find this kingdom. Jesus also taught that we could experience His Spirit alive inside us. Paul discovered that this kingdom and divine presence within him was the secret to his contentment. He wrote in Philippians 4:11, “I have learned to be content whatever the circumstances.” Pretty impressive for a guy who often seemed “down on his luck”―imprisoned, beaten, hungry, and shipwrecked…three times!

In our human view, circumstances are classified as either “good” or “bad,” but this view falls short of the truth. Every circumstance carries a seed of divine potential because God is always at work, producing love, freedom, compassion, peace, and perseverance inside of us. The raw materials of human existence are what God uses to transform us. Opportunities to love enemies transform us into people of love. Opportunities to face our fears help us grow in true peace and freedom. The disappointments and adversities of life are opportunities to break our dependencies and return to the true source of our well-being.

Genesis 50:20 reads, “You intended to harm me, but God intended it for good.” In other words, the worst of circumstances pose no real threat to your well-being―God’s good purpose is not thwarted and God’s kingdom within you is not diminished. Even the worst case scenario, death, is merely a doorway to a continuing reality with God. Jesus’ resurrection called the bluff of death and showed it to be powerless.

Let’s say this week something unusual and unexpected happens in your life that really messes things up for you. “Luck” would say you were the victim of forces outside your control. Onlookers might offer sympathy, recognizing how unfortunate your circumstances are and the misfortune they caused. Inside you’re thinking, “Why me? This sucks!”

Stop! Turn it over in your mind. You’re not a victim of bad luck; you have an opportunity to grow in the love, peace, freedom, and fulfillment God desires for you. Turn within yourself to the kingdom of God and the Spirit of Christ who supplies abundantly for your every spiritual need. Rather than approach your circumstance with anger, stress, resentment, and fear, instead allow yourself to receive and be that love, peace, and freedom in the midst of it.

Remember spoon boy from The Matrix?

Spoon boy: Do not try and bend the spoon. That’s impossible. Instead… only try to realize the truth.

Spoon boy: There is no spoon.

Neo: There is no spoon?

Spoon boy: Then you’ll see, that it is not the spoon that bends, it is only yourself.

Look at it this way:

• Spirit: Do not associate your well-being with luck. Instead…only try and realize the truth.

How to Change the Way You Pray

• Spirit: There is no luck.

• Spirit: Then you’ll see, that it is not luck that determines your well-being, it is only my kingdom and presence within you.

Truth be told, people overstate the connection between leprechauns and luck with Ireland and Saint Patrick’s Day. Despite the many trials associated with Ireland, historically the Irish are known for being deeply spiritual people, preferring silence and solitude, and holding a great appreciation for ordinary life. They found a deep and abiding peace in the midst of turbulent times, which is expressed in this Celtic Benediction:

• Deep peace of the Running Wave to you

• Deep peace of the Flowing Air to you

• Deep peace of the Quiet Earth to you

• Deep peace of the Shining Stars to you

• Deep peace of the Son of Peace to you

Jim Palmer is the author of Divine Nobodies, and Wide Open Spaces. You can find him on Facebook, Twitter, and divinenobodies.com.