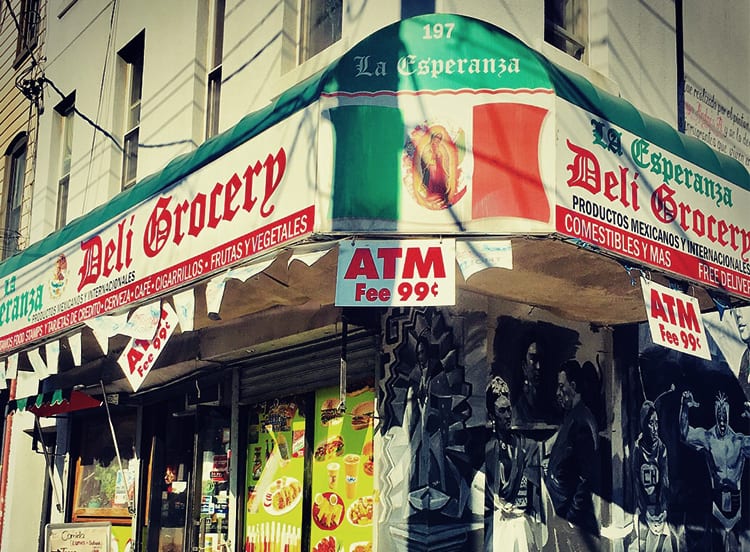 One beautiful thing about New York City is the myriad one-of-a-kind experiences the city has to offer. For over a decade, musician and self-described “sometimes pastor” Vince Anderson has been the purveyor of one such experience. Simply and affectionately known as “The Rev.,” Anderson and his “Love Choir” have been summoning local hipsters and urban pilgrims to the dance floor at Brooklyn’s Union Pool, to sweat it out as he growls Bible stories and spiritual lessons over a bed of unique and energetic retro-soul music he calls “dirty gospel.”

But “dirty gospel” is more than just a sound. It’s a philosophy of being and doing in the world that permeates Anderson’s latest project: Bodega Advent, a collaborative communal art project that turns the adjacent neighborhoods of Bushwick, Brooklyn and Ridgewood, Queens into a “living advent calendar.”

“So you know the idea of an advent calendar,” Anderson says, in a phone interview. “Maybe you had [one] for the 25 days of December, and every day you got to open a little window and get a piece of candy and it served as kind of a countdown to Christmas. We wanted to make this living advent calendar, where we take 25 artists, have commissioned work from them and then put their art up in windows in 25 bodegas, one a day for the 25 days of December.”

When he’s not conjuring up a sweaty liturgy at the local bar, Anderson serves as the director of art and community development at Bushwick Abbey, an Episcopal church that is backing the project in part. Many of the contributing artists are community artists, unaffiliated with the church, but known for their mural work in the neighborhood.

We talked with Anderson about the philosophy and vision of inviting the neighborhood to observe Advent through art in “secular” spaces.

RELEVANT: I have a litany of “why” questions for you, Vince. There are a lot of people who don’t know about Advent or who don’t know why people celebrate it. Why do you think it’s important that we even observe Advent to begin with?

You know, this language of being “woke” in the contemporary, it’s so relevant. Advent is that season. And the other thing about Advent is that it’s a way for me to say, it’s not Christmas yet, so don’t sell me anything. Advent becomes a counter-cultural response to the commodification and capitalization of Christmas. So I can say, no I’m not going to buy anything until the 25th. So it’s kind of this counter-cultural thing to say.

RELEVANT: Why observe Advent in this way—through making art?

Art interrupts your regular narrative in a way that makes you pay attention in a different way. Putting art in bodega windows interrupts your daily routine. So, you’re working your 9 to 5 job, you go to your local bodega in the morning for your bagel and your cup of coffee. And all of a sudden, you see a piece of abstract art in the window.

In a way that kind of makes you say, “Hmm. Something’s a little different. I saw something different today. I was inspired, I saw beauty today, when normally I just see routine.” I think the big meaning of that for us is, when you use art that way, you [can possibly] get people dreaming: “If an artist can interrupt me, maybe I can interrupt the powers that be.”

RELEVANT: Why bodegas? Why does the entire neighborhood need to experience Advent in these common spaces?

There are a lot of answers to that question. I think one is that Bushwick is [like] so many neighborhoods these days in urban areas around the U.S. [that] are rapidly gentrifying. These bodegas are very often the last citadels against this kind of gentrification. They say no, we are not going anywhere. And so for me, bodegas themselves are a powerful act of resistance, which is a big Advent theme. It’s almost like we’re not giving Advent to bodegas. Bodegas are giving us Advent.

And the other big picture is that bodegas are places of hospitality in a way that sometimes churches aren’t. Churches sometimes struggle with hospitality and welcoming everybody. Bodegas welcome everybody.

So when you put bodega into Advent and into the nativity story—there’s always “room in the inn,” there’s always room in the bodega. So the big picture of this is that the Christ child is welcome at the bodega just like everybody else is.

RELEVANT: You mentioned a couple of times this connection between Advent and resistance. Can you talk more about that?

Well, if part of the Advent season is John the Baptist’s wilderness cry: “Prepare ye the way of the Lord,” then John the Baptist [is] the voice of the resistance, the voice of a counter-culture, the voice that’s saying there’s a different way—the commonwealth of God—that calls for a different way of living … a radical inclusion. That reminds us that we are all children of God whether you like it or not. And whether you feel that we’re all children of God or not.

RELEVANT: Who would you say that the Bodega Advent is for? Is there a target audience that you’re hoping would experience this?

Well, you know, I think primarily it’s a gift to our neighborhood. On the bigger sense of things, I want people, like Christians who have never thought of Advent before or non-Christians or people from other faiths or no faith at all who have never thought of Advent at all to kind of, awaken to the idea that we can do this better. We can do this living together, we can be a human family better than we’re doing it now. The audience is anyone who wants to be open to changing the world.

RELEVANT: Is that what you’d want people to experience from this?  That we can be a human family better?

I think so. I think the takeaway is, you know, pay attention to one another. Pay attention to the person in front of you. See the beauty of the neighborhood you live in. My hope is that it inspires people to look at their neighborhood and the people around them in a new way.

The folks at Bodega Advent have sought to make the project interactive for people who don’t have the fortune to live in New York City. The Instagram account is designed to act like an actual advent calendar. If you go to the Instagram account, they’ve actually pre-posted the entire 25 days, and each day they put a new art combination where the number used to be.

You can find them at @BodegaAdvent or visit their website at BodegaAdvent.com