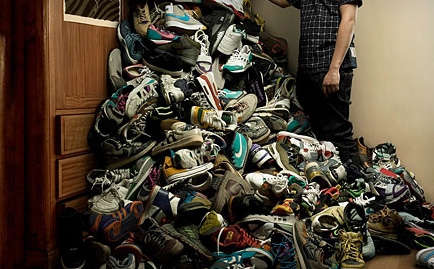 "What I want," Lydia implored, "is for you to make me stop wanting the next summer fashion collection."

She was a young—early 20s, maybe—serious-minded Christian desperate for freedom from the shopping-mad culture all around.

I know how Lydia feels.

"Buy me!" screams the book on Amazon. "Dive in!" calls the beach from paradise on the travel advert. And the more subtle stuff, too: I desire films to help me to relax; I desire a car so I’m not restricted in my options; I desire food because—well, because it’s just food. And yet all the time the "holy" guilt inside my head screams, "Desire is bad."

So what did I say to Lydia?

I said no. I can’t stop her from desiring.

Why not? Because it’s impossible. In fact, it’s undesirable. God made you to desire. God is a desiring being. He desires you, for starters. And He made you in His image. So desire is part of who you are, and it can’t be switched off.

So … desire is good? Not exactly. Our addiction to stuff has unhealthy side effects. It doesn’t truly satisfy—we have nearly three times as much stuff as our grandparents, but on average we’re no happier than they were. It’s not good for the planet. And it tends to make us just that much more self-obsessed.

The problem isn’t the fact that we desire—it’s what we desire. "Why are you working so hard and worrying so much about stuff that just isn’t going to last?" Jesus asked. Don’t stop desiring; desire the Kingdom. Seek that and everything else worth having will come with the bargain (Luke 12:29-34). If there’s nothing at stake, our hearts are not engaged. If we’re not risking anything real, our desire isn’t going to follow. In other words, where your treasure is, there your heart will be.

Christianity has been called a personal relationship or a religion of the heart. But the heart is just where consumerism wants your faith to stay. It’s a well-worked deal: Let God have your heart and consumer society will effortlessly take up the rest—your politics, your relationships, your finances, your fears, your habits and your imagination. Whether your Christianity is megazealous enthusiasm or chilled-out faith tourism, consumerism doesn’t care. As long as your faith stays in your heart.

But Jesus wasn’t interested in this kind of deal. He deliberately calls people to act in ways that evoke their desire; He calls out their heart by summoning them to action. He invites them to put their treasure where they want their heart to be.

James K. A. Smith describes this tellingly in his book Desiring the Kingdom. He writes that some practices are "identity-forming" in that they "get hold of our core desire." For instance, we may not feel that our shopping habits, film viewing and web surfing affect us that deeply, but all the while they are "grabbing hold of hearts and capturing imaginations, shaping our love and desire and actually forming us in powerful ways." To be a follower of Christ is to be on a journey where heart and life and possessions all get pulled along in the direction of the Kingdom.

So what kind of habits can reshape our desires? There are many: Sabbath worship with all our soul and strength; sharing life with other Christians; practical action for the poor, and many more. But Jesus did prescribe one particular habit to remake the desires of would-be disciples with plenty of stuff to their name: sell your possessions.

In fact, in Luke’s Gospel. every time someone increases their possessions, it coincides with moving away from the Kingdom. Bigger barns, new fields, new oxen—it didn’t matter what it was; their hearts were just following their newly acquired stuff. But to His followers, Jesus said "sell your possessions" and "those of you who do not give up everything you have cannot be my disciples" (Luke 12:33 and 14:33).

There’s no point turning this into a new law—our response should be Spirit-inspired, grace-filled and creatively unique. But this is definitely a call to action. So what could that possibly look like?

Idea one: sell your possessions. Call me a fundamentalist, but why don’t we actually try what Jesus said? A few years back, I realized I had never sold anything to give the money to the poor. So I decided to make a sale—my high-tech keyboard. I can’t say it didn’t hurt, but I was amazed at how freeing it was. And four years later, in answer to a prayer, God gave us a piano for free. So sell something. Go crazy-sell two things.

Idea two: change tracks. A friend of mine did this. He was a successful management consultant in London, a bright guy with a bright future. But it turns out he was on a different track. At first it was just that he had an older car than most colleagues. Then he started sharing his budget with friends as a way of being accountable. Before long he negotiated a four-day week so he could serve his local church. Little steps, one thing at a time, but God was remaking the shape of his life. And where is he now? In Pakistan with his wife and kids helping to start microfinance initiatives.

It’s not the destination that counts, though. It’s the journey—the willingness to let the Kingdom change your desire, your habits and even the shape of your life. It begins with the smallest of steps, but where it will lead you, who can say?

Mark Powley is the author of Consumer Detox (Zondervan. 2011 . © Mark Powley), from which this article is adapted. Used with permission. From the August/September 2011 issue of Neue magazine.

A Movement of Worship