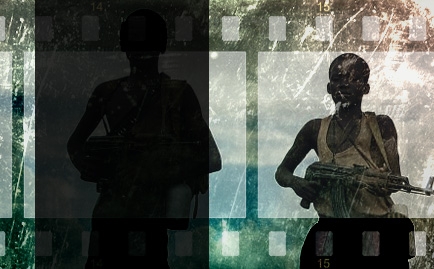 While most of the world was watching the destruction wrought by the Haiti earthquake last January from the safety of their living rooms, Lindsay Branham and Jonathan Olinger were flying into the Port-au-Prince airport on a Spanish government flight. They were there to gather footage of the devastation and its human toll as freelancers working with a CNN team led by Soledad O’Brien for a special called “Rescued.” The filmmakers found themselves hitting the quake’s epicenter on the same day as the cable giant’s prime superstar, Anderson Cooper.

“We were able to get to places and see things on almost no money,” Branham recalls. “Just telling true stories.”

While the “Rescued” special drew high ratings and acclaim, that was just the beginning of what the duo accomplished in Haiti. By the time they were done with the project, which focused on two orphans, they had helped track down the family of one of the children and returned the child to relatives who had been duped amid desperation into selling the child into slavery.

It wasn’t the first time the two found themselves in one of the world’s most dangerous places. But most of the time, they’re not just helping report on world events.

As members of the social justice documentary team Discover the Journey, Olinger (who founded DTJ) and Branham have traveled the globe to shine a light on an array of injustices. Their goal is to inspire viewers to take action. This sort of filmmaking has seen a sharper rise in the last few years, with organizations finding value in not just telling the stories of those they’re helping, but showing viewers the hardships being experienced on the other side of the world.

One of the most famous examples is the success of Invisible Children, a documentary-turned-organization helping child soldiers in Africa. The filmmakers built a grassroots organization around helping rescue child soldiers like those in the film. This was also the case with Laura Waters Hinson, the filmmaker behind As We Forgive, a documentary about the road to recovery and forgiveness in Rwanda after the massive genocide in 1994. Waters Hinson has in turn become an advocate for the people of Rwanda. The ability for a video to become viral in just a few hours also encourages this trend, as social justice filmmakers can get their message out to hundreds of thousands of viewers. This growing movement strives to vividly portray the world’s troubles and spur improvements.

“I would call myself a follower of Jesus, and my belief in Jesus as a man who loved peace and justice is the ethos behind what I do,” Branham explains. “Discover the Journey isn’t necessarily a Christian organization, but for me personally, I find hope in believing there is something greater than humans at work in this sin-filled world.”

Branham and Olinger’s most harrowing experience so far was a trip to Africa. There, they tried to earn the trust of child soldiers fighting in the Democratic Republic of Congo (DRC). Branham had previously lived there for 18 months before bringing Olinger back with her to meet with the young soldiers.

“We’ve found more often than not that they’re eager to share. We’ve become really good friends with them and developed a bond of trust—that’s a big change in them,” she says. “The longevity of the relationship is proof of our trustworthiness. The first day it took us an hour and a half to say what we’re doing, and we didn’t know if we’d get their trust. Often people come in, take their image and story and do nothing for them. We return to these communities and do it in a way we feel honors people.”

Olinger and Branham took their findings to congressional staffers in Washington, D.C., in January, presenting, alongside Human Rights Watch and Resolve, the problem of the DRC’s civil war and child soldiers. Their goal was to gain American support to end the conflict, which has also spurred some of the worst genocidal fighting in Sudan. But they acknowledge one of the biggest frustrations—and motivations—is to get regular people involved beyond just buying a fundraising T-shirt.

“We really believe awareness is the first step, and people can’t act unless they know,” Olinger says. “Most of the injustices we expose, people have never heard of in their entire life, so it’s important to bridge that first barrier—a lack of awareness and knowledge. Awareness for awareness’ sake is bankrupt, and it does these kids no good.

“We make clear, actionable goals in which people can take action and change the situation for children. We also want people to wrestle with these stories and find ways they can take action. We don’t want to spoon-feed people or say, ‘Buy a T-shirt and you’ve done your part.’ True change can take decades, but nothing engages people like a story.”

Brent Gudgel is another young Christian filmmaker who would agree wholeheartedly with that statement. As the founder of Deidox, he is also at the forefront of spotlighting some of the world’s biggest issues, such as the AIDS epidemic in Africa, which he documented for a Showtime special. He started Deidox after working with other nonprofit groups on documentary shoots around the world and finding that while they were highlighting the issues, there were many human stories going untold—of both the suffering and the heroic people working to alleviate the suffering.

“We wanted to share their stories with our friends and also remember them. In faith we’re told what to do, we’re told there’s a problem and something we need to do about it,” Gudgel says. “We were going all over the place and experiencing how people’s lives are different and how what they do daily is different because of God. We realized that these are the stories we want to tell all the time, so we started Deidox to document how people live their lives because of their faith—everyday people, not big speakers or nonprofit founders.”

Surprisingly, Deidox is not a nonprofit like many other Christian-based ventures. That was a conscious decision by Gudgel, who didn’t want to garner grant funding that other Christian groups could use. He sells his group’s films to churches for their use in services, but he also enables small groups and individuals to download the films from their website for $5 per film. They also currently offer churches a $100 one-time fee, allowing them to download all of Deidox’s films so far, as well as all their future films.

Among Deidox’s projects is an ongoing series of monthly short films for the Union Rescue Mission homeless shelter in downtown Los Angeles. Their past film subjects include a reforestation project in Africa and profiles of a Burmese refugee in Thailand, as well as a man who runs a secret home church in China and a Tennessee doctor who left his thriving private practice to create a clinic for the uninsured. The filmmaking team finds interesting individuals to shoot and then follows them for a week of their lives.

Gudgel believes a big difference in the documentary filmmaking done by Deidox and other Christian groups is the sense of hope they offer by showing people can get involved and make a difference.

“With what typically gets out in media, we don’t really see how people can make a difference. Even an Oscar-winning film like Born into Brothels [about children born to and raised by prostitutes in brothels in India] offers no hope,” Gudgel says. “The filmmaker impacted their lives for a short time but didn’t show how an audience could help. One of our goals is to show people how to help, as we show faith impacting people’s decisions in lives the more we help. We make decisions based on the shows we watch, and if Friends can impact people and their viewpoint on life, why can’t we? That’s how communication works.”

This article originally appeared in the premiere issue of Reject Apathy magazine. Check out the new rejectapathy.com for more stories of social justice.

A Waste of Youth