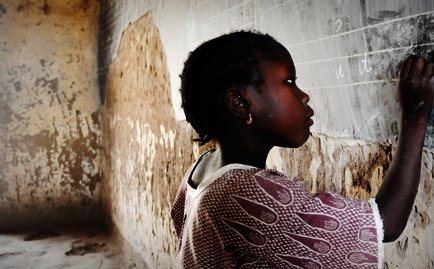 Our world is increasingly divided between rich and poor. When I was
born, the richest countries were 35 times as wealthy as the poorest.
Half a century later, it stood at 75 to 1. The divide more than doubled
on the watch of my generation—the one that vowed to end war and save
the planet.

This is not how God intended the world to be. The apostle Paul
spoke to the issue of disparity in 2 Corinthians, when he urged the
wealthier Corinthian church to make a relief offering to the Christians
in Jerusalem, who were in dire economic circumstances. “Our desire is
not that others might be relieved while you are hard pressed,” he
wrote, “but that there might be equality. At the present time your
plenty will supply what they need, so that in turn their plenty will
supply what you need. The goal is equality, as it is written: ‘The one
who gathered much did not have too much, and the one who gathered
little did not have too little’” (8:13-15, TNIV).

The Bible is clear that God’s people always had a responsibility to see
that everyone in their society was cared for at a basic-needs level.
Ruth was able to glean wheat from Boaz’s field because God had
instructed those who controlled the land to not harvest everything, so
that there would be food for the poor.

For Christians, this is a justice issue or, stated more bluntly, a
moral issue in which those of us who have plenty seem willing to allow
others to have nothing. It is not our fault that people are poor, but
it is our responsibility to do something about it.

People and churches that believe tackling poverty is easy probably
have never tried it. Poverty, disease, ethnic hatred and injustice are
the oldest plagues on the human race and when we tackle them, we must
not underestimate the challenge. The truth is that the poor know much
more about their own problems than we do.

We think we know their problems and have the answers even before we
speak with them face to face. Walking with the poor requires a
willingness to learn from them before attempting to help them. Tackling
issues of health education or economic deprivation cross culturally is
rocket science, and anyone who attempts it without appreciating its
complexity will regret it.     We do have one thing the poor need:
cash. Not just as a hand-out, but for creating businesses, jobs, and
hope. Nobel Prize-winning Economist Milton Freedman explained, “The
poor stay poor, not because they are lazy but because they have no
access to capital.”

Microfinance is a proven method for helping impoverished
communities move toward economic self-sufficiency through the provision
of small loans and other financial services. Traditional loans are out
of the question for the poor, who have nothing but their own labor and
initiative to guarantee a loan’s repayment. So poor businesspeople and
farmers often depend on private money lenders, what we would call “loan
sharks,” to buy seeds and inventory. Exorbitant interest rates make it impossible for them to get ahead.

Through microfinance, entrepreneurs in poor communities can borrow
on reasonable terms. Our clients (most of them women) use the loans to
start a small business, for example, to buy a sewing machine for a
one-person tailoring shop. After the first loan is repaid—and 98.7
percent of our loans are—they often take a larger loan to expand their
businesses, creating local jobs. In one Kenyan community, for every
$1,000 in loans, nearly 11 jobs were created or sustained, and the
lives of more than 28 children were improved. Once the loans are
repaid, that money will be recycled over and over again to help other
entrepreneurs; these loans are a powerful tool in the long-term
transformation of a community.

It doesn’t take much to help people in need. The lack of clean
water causes millions of needless child deaths each year. Yet the cost
to bring clean water to one person costs only $1 per year. When you
realize that a gift as small as a dollar can save a life, it is hard to
argue that you’re not wealthy enough to make a difference. We might
instead want to ask just how many lives our own wealth would enable us
to save. In truth, the cost to feed the hungry, to educate children, to
inoculate children, and even to provide needed surgeries to the poorest
of the poor is extremely affordable and within the reach of most of us.

I’m hopeful for this generation just starting out in life. They
have a much broader view of the world than mine. Technology has brought
the world closer together, enabling us to share both problems and
solutions. I pray they have the will and persistence to bridge the
divide between rich and poor, and bring the world much closer to God’s
ideal.

Richard Stearns is the president of World Vision, U.S., and author of The Hole in Our Gospel, published by Thomas Nelson. This article originally appeared in RELEVANT Magazine. Get more articles like this by subscribing here.