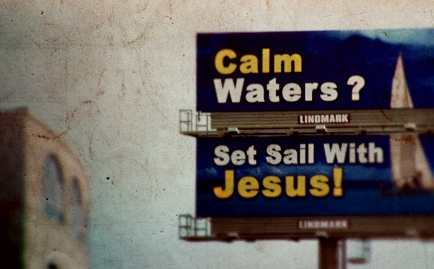 The average American encounters 3,000 commercial messages each day. Whether this is a radio commercial, a magazine ad, a logo on the side of a coffee cup or a billboard you pass on the highway, these images and messages are designed to cause you to think of your life as incomplete, and desire the product they are selling to make your life complete again.

A standard formula used in many commercials is twofold: 1) To elicit a thought in the viewer that their life is not satisfactory and then 2) To convince the viewer their life could be made satisfactory with the introduction of said product. If you hear these messages 3,000 times per day, your brain becomes programmed to think in this pattern. Rather than being satisfied, a person begins to believe their life is lacking, whether it’s actually lacking or not.

The idea is to convince you that you aren’t going to be happy unless you purchase something. And make no mistake, this is a powerful manipulative tool. Some experts have referred to advertising as the “relentless propaganda on behalf of goods in general.” In his breakthrough book Buyology, Martin Lindstrom talks about how marketers package their products within rituals, even going so far as to create rituals within which their products can be used. He notes there is no cultural tradition that would have us put a lime in a bottle of Corona, for instance, and how that ritual came about when a marketer placed a bet with a friend at a bar that he could make the masses put a lime in a bottle of beer.

But rituals don’t exist because of marketers. Rituals exist because of a need in the human spirit for magical beliefs that their repeated actions are tied to good luck, fortune and security. To find the most ritualistic of people, one need look no further than the religious community. Some denominations take communion every week, some believe that unless you are baptized you cannot go to heaven, and wars have been fought over how these rituals should be acted out. And so the rituals advertisers sell us, whether it’s putting on makeup, using aftershave lotion, renting a tux for a wedding or being buried in a wooden coffin, are plays upon an innate human and even religious need.

But are rituals bad? Not from a biblical perspective. Christ asked us to remember Him through the breaking of bread and drinking of wine. Christ also asked that we be baptized, though it’s theologically debatable whether this was symbolism for the true baptism we have in the likeness with Him and association with His death. We are also asked to pray and to fast, both rituals.

That said, from nearly any perspective, we would agree some religious cultures take ritual too far. (Who could argue the handling of snakes by some churches is ritual taken too far?) Rituals do nothing magical for us. Perhaps it could be said the more insecure a person’s faith, the more he might turn to religious ritual for security. The truth is in the motives, I suspect, and in the understanding that the rituals themselves have no magical powers.

Advertisers often play on something psychologists call loss aversion. Loss aversion suggests people are more motivated to avoid losing something than they are to acquire something new. For instance, in a study done on a street in Las Vegas, passersby were given a 20-dollar bill and then given the opportunity to double their money by betting on a single card. They could walk away with the 20, or double their money.

Most participants chose to walk away from the game, keeping the 20-dollar bill they had just been given. But when the game was changed and the participants were given 40 dollars, only to have 20 taken back a moment later and then given a chance to win back the 20 taken from them, nearly all participants decided to take the same risk and get back what they had lost. In other words, when they had something and lost it, they were more inclined to try to get it back.

It isn’t only advertisers who play on this psychological phenomenon, it’s politicians and talk-show hosts and nearly anybody trying to convince anybody of anything. How many times have you heard the phrase “take back our country,” or within the Church “take a stand for biblical theology” or this kind of language. The idea is to convince a group of people they are losing ground.

Loss aversion is the reason we keep the gym membership even though we don’t use it, it’s probably the reason you voted the way you did in the last election, it’s the reason people hoard material possessions and stay in bad relationships. The idea is that losing something costs you more happiness than gaining something gives you.

Have We Made the Bible Into an Idol?

Where did the psychological phenomenon come from?

What if loss aversion comes from actual events in human history? What if there was once a paradise where man and woman, who were designed to interact with God, actually did interact with God, and that paradise has been lost. What if intuitively every human knows not only that life isn’t what it’s supposed to be, but that it was actually once something completely different and great? What if this is where the psychological phenomenon of loss aversion comes from?

So this begs certain questions. What are we really missing in life? And can politicians deliver that something to us? Are political ideas causing us to lose paradise? Are goods and services actually going to return us to paradise? What is it that will bring us internal paradise?

Our theology actually explains why it is that advertising and rituals are so effective. By that I mean Christian theology helps make sense of why we think and feel the way we do, and why we are all longing for something different and better, and why it is that a suggestion we are losing or have lost paradise, and must get back to it, is a powerful human sentiment that advertisers as well as leaders use, to sell products and ideas.

Donald Miller is the author of Blue Like Jazz and A Million Miles in a Thousand Years. This article is adapted from material on his blog.

The Truth About Apathy

James Cameron Threatens All of Us