Dressing up for church isn’t that unusual, especially on Easter Sunday. You and your siblings have probably been matching your church fits since you were kids, getting those gingham shirts and pastel skirts on point to celebrate the resurrection Sunday. Nothing strange about it. But Mosaic LA Pastor Erwin McManus’ post about his own church outfit has sparked a lot of controversy. See if you can tell what sets this apart. 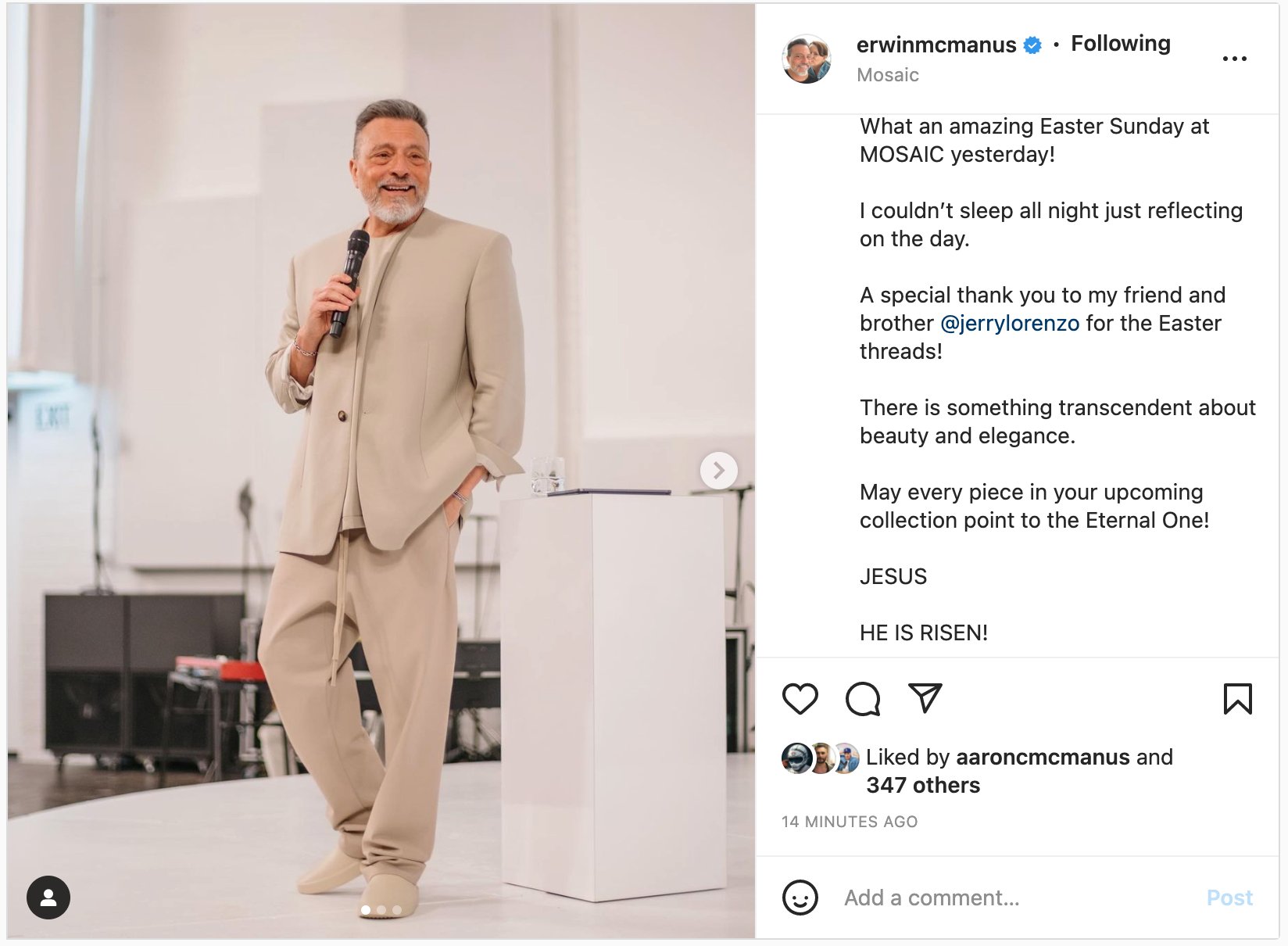 “What an amazing Easter Sunday at MOSAIC yesterday!” McManus posted. “I couldn’t sleep all night just reflecting on the day. A special thank you to my friend and brother @jerrylorenzo for the Easter threads! There is something transcendent about beauty and elegance. May every piece in your upcoming collection point to the Eternal One!”

McManus’ sleek, monochromatic look was put together by Jerry Lorenzo, founder of the red-hot (and very pricey) American luxury brand Fear of God.

(McManus has since edited the caption to say “May every piece in your upcoming ETERNAL COLLECTION point to the Eternal One.”)

The post was shared on Twitter by New York Times’ religion correspondent Ruth Graham, who said that she was “excited to announce I’m writing a 500-page book about this Easter post from an LA megachurch pastor.”

“Uh oh @erwinmcmanus,” wrote Christian podcast the Magnificast. “You forgot to read the Bible again: ‘Come now, you rich people, weep and wail for the miseries that are coming to you. Your riches have rotted, and your clothes are moth-eaten.’ (James 5:1-2)”

But others defended McManus. “I was [at Mosaic] for 13 years,” one woman responded. “It’s a VERY artistic space & I’d say well over 1/2 the congregants are in the entertainment industry. Jerry Lozano [sic] attends there. I GET this, but gotta say: Erwin was there for me at places of deep hurt & pain. He’s the real deal. Grateful.”

“Erwin mcmanus is one of the few Christian thought leaders i still love,” wrote another. “He’s super LA creative and etc but nonetheless down to earth and a h*** of a lot more real than most pastors. his books really helped me and i just like his whole mindset towards humanity, life, and faith.”

“As to the pushback on pastors wearing high-end, obscenely expensive clothing . . . this is not a new criticism,” she wrote. “This topic has been visited and revisited and it’s creating mistrust and derision with believers and non-believers alike.

What I’d say to that is, 1) read the room, and 2) maybe consider wearing high-end threads in your free time, and not from the pulpit. I get it. I like fashion. I’ve set alarms to wake up to buy Supreme drops for my kids, I’ve bought stuff people would find ostentatious. But I’d also say, if you are a pastor standing on a public platform, you have to consider the impact of the clothing you’re wearing, and scriptures like Matt 18:6 or 1 Thes 5:22, and maybe show more discretion in your clothing choices.”

How to Pray When You Don’t Know What to Pray