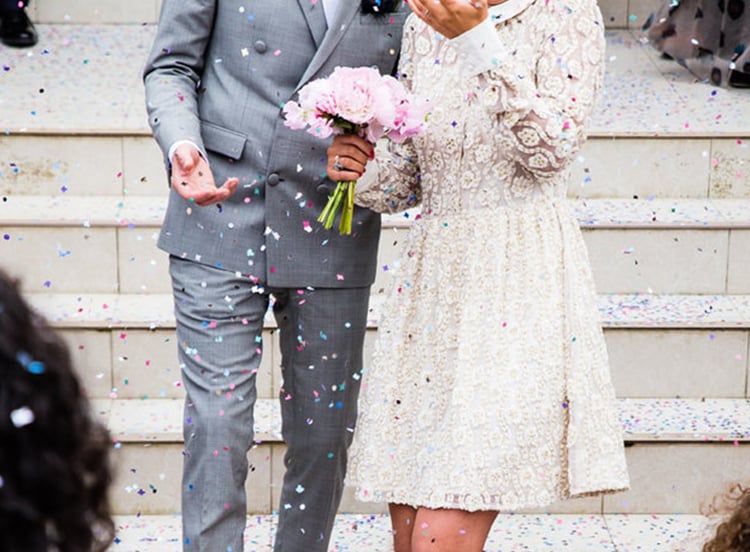 Recently a neighbor asked me to perform a wedding ceremony for his sister-in law and her fiancé. My policy is to refuse to marry people I don’t know—although, being new to the marrying business, this was the first time the policy came into play. It was also the first exception to the policy.

I didn’t know the couple, but I was aware of their situation. Sarah and Kyle were engaged a little over a year ago. A few weeks following their announcement, all wedding plans went on hold. Kyle was diagnosed with cancer. Plans went on hold. After exhausting all their options, doctors gave Kyle a month or so to live. Nothing they had tried had halted the insurgence raging in his bone marrow.

This prognosis brought wedding plans back to forefront with a vengeance. Everything came together, from bridesmaids’ dresses to reception halls to harpist, in a little over a week. They were going to get married; white blood cell count be damned. What follows is my first draft of a homily for the occasion. I say “draft” because, when I ran it by the couple for their approval, they asked I not mention cancer or Kyle’s prognosis. That stuff had consumed the whole past year and destroyed the picture they had of years to come. They wanted this one day to be free of it. That made sense, so I wrote a different one, even though I liked what I originally had to say. Reflecting on what it means to marry in the shadow of death was, for me, a valuable exercise. Maybe here, rather than a wedding ceremony darkened by that shadow, is a better place for it.

According to the tabloids in check out lanes, these days we’re fascinated by the fact that celebrities are breeding or adopting. I suppose this obsession with celebrity babies makes sense, given our obsession with celebrity weddings in years past. There is sort of a natural progression there—not that the babies are all born to the people whose weddings we were obsessed with. After all, that requires a marriage to last at least nine months.

What is fascinating about celebrity marriages, of course, is the fact that their budgets are pretty much unlimited. They can do whatever it takes to put on a “fairy tale wedding.” Of course, as their own track record shows, a fairy tale wedding does not necessarily produce a fairy tale marriage—a happily ever after. In fact, you could argue that, regardless your budget, no wedding produces a happily ever after. After all, this isn’t a fairy tale we find ourselves in. It’s the real world. Neither Kyle nor Sarah have the luxury of believing in fairy tales. That’s OK, because weddings aren’t about fairy tales. They are about love and commitment. At the heart of this ceremony are the vows. And the vows that you will make to one another are vows in touch with the real world. These vows know that loving someone in this world is risky. It takes guts. To do it, you’ve got to be prepared for good times and bad, riches and poverty, sickness and health. This is the risk you take whenever you commit to loving someone.

We may simply be more in touch with reality at this wedding. Therefore if we cannot celebrate the love and commitment demonstrated in this marriage maybe we shouldn’t celebrate any marriage. Every marriage is a risk.

And this is in part where God comes in. We need God in order to believe that the risk is worth it, that this isn’t some exercise in denial, that despite what can and does happen in this world, love is worth it. Paul thinks it is. In fact, he makes this audacious claim about love: “love never ends” (1 Corinthians 13:8 NRSV). Love never ends. Paul can make such an audacious claim, not because he believes in fairy tales, but because he believes in God—a God who is love. God’s love, like yours, Sarah, for Kyle and yours, Kyle, for Sarah, is a love that takes risks. “God so loved the world,” it says in that most frequently quoted verse, “God so loved the world that he sent his only Son” (John 3:16). Nothing testifies as loudly to how risky loving is like the cross. Loving us resulted in crucifixion. But the reason Paul dares make his bold claim is because the cross cannot kill the love of God. In addition to a cross, there is an empty tomb. Nothing testifies as loudly to the power of love as Jesus’ resurrection. The love of God is stronger than death.

And that makes this an occasion for celebration. It’s worth getting dressed up for, taking lots of pictures, making toasts and feasting. We are witnessing something beautiful. You could even say that we are catching a glimpse of eternity. Why eternity? Because Sarah loves Kyle, Kyle loves Sarah and love never ends. Thanks be to God. It never ends.

Father, thank you for your perfect and unconditional love. I don’t deserve your love, but I am grateful for it. Thank you for loving me perfectly.