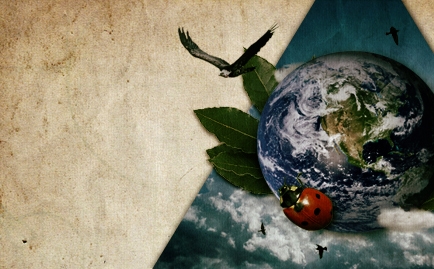 In 1969, a Democratic Senator from Wisconsin had a novel idea that would
change the world. In response to the Santa Barbara oil spill, Gaylord
Nelson proposed a holiday for the environment. Environmental concerns
existed at the street level in that time, but they had never formally
made it to Washington. If the grassroots energy surrounding these
issues could be harnessed, Senator Nelson believed they might get a
hearing. On April 22, 1970, 20 million Americans celebrated Earth Day
for the first time.

“It was a gamble,” Nelson later reflected. “But it worked.”

Up until then, gas stations were selling leaded gas, air purity was
largely unregulated and agricultural pesticides were sprayed with
little oversight. In the 1960s, a factory could dump toxic sludge into
a river and there was almost nothing anyone could do to stop them.

Earth Day was a sign that everything was about to change.
The next decade became known as the “Environmental Decade.”
Republicans and Democrats banded together to create the Environmental
Protection Agency (EPA), and Congress passed the most sweeping laws
since Roosevelt’s New Deal. Among new legislation were the Clean Water
Act, the Clean Air Act, and the Endangered Species Act.
Environmentalism was not as divisive as it is today, so these laws
gained bipartisan support. Conservation was as conservative as it was
liberal, which is to say, it was American. But, bipartisanship would
not last.

As political tides changed, corporations became king and
environmentalism lost its stylishness in the public consciousness.
Popular support waned, and political parties began using the
environment as a weapon to beat each other up. Clean air and water
became greater problems, and land was clear-cut to make way for
cookie-cutter neighborhoods.

Throughout the years of change, however, one thing remained
constant: people have always observed Earth Day. The eco-holiday’s
popularity grew despite the challenges. In 1990, Earth Day hit the
world stage as 141 countries joined in and promoted recycling. In 2000,
1.8 million gathered in Central Park’s Great Lawn to commemorate and
184 countries took part.

Forty years later, April 22 continues to unite those who believe in
caring for our world and the people who depend on it. Approximately 200
countries and around 1 billion students, activists, soccer moms and
working folks will celebrate this year.

With some exceptions, the American Christian community will be
mostly absent from celebrations. Many Christians are skeptical of any
environmental problems—a trend best viewed through the lens of history.

In response to the Cultural Revolution of the ‘60s and ‘70s, religious
Americans also began choosing sides. The Right claimed God, the Left
claimed green and many Christians found themselves estranged from the
environmental movement. Many people of faith ceded the moral high
ground in exclusive pursuit of other issues. Soon, environmental policy
fell on the courts and was inherited by politicians, leaving its
grassroots behind and conservative Christians on the margins. Just as
theologically conservative Christians mostly sat out of the civil
rights revolution, we also sat out the environmental revolution.

“Environmentalist” is still a dirty word among some Christians.
Like “Trekkie,” the word may be used in private, but you don’t want it
on a personalized license plate. For some, the label is synonymous with
secularism, Gaia worship, New Ageism and politically liberal special
interest groups. Although some Christ-followers find it increasingly
difficult to ignore the environmental impact of their lifestyles and
are beginning to feel a holy stirring as they wake up to crazy weather
patterns, smoggy skylines and disappearing forests, others are
uncomfortable with “environmentalists” and even less comfortable with
their “agenda.”

The problem is that Christians can no longer afford to sit on the
sidelines. Millions die annually from preventable, water-related
diseases. Most are children. Extinction rates continue to exceed
natural rates by more than 100 times. Our energy consumption funds
mountaintop removal coal mining while our oil addiction fouls the air
and laces the pockets of oppressive dictatorships.

How the Challenges You Face Actually Teach You About God

Our faith provides an inspiring narrative to face these crises—we
serve the One who created everything, called it “good” and asked humans
to care for and protect it—but most Christians haven’t tapped into the
story line.

I believe we must depolarize and depoliticize environmentalism. Caring
for creation should not be framed in a right-left dichotomy.
Stewardship isn’t primarily a political, social or economic issue; it
is a moral issue the people of God have been called to address. If we
desire to remain true to God’s Word, Christians must redeem the cause
and make it our own. We need to rediscover the scriptural basis for
creation care, engage our planet’s daunting problems and propose
solutions most Christians are comfortable with. To abandon these issues
to secular environmentalists shirks our God-given responsibility to
care for His planet.

Addressing an Earth Day crowd in 1990, Nelson said, “I don’t want to
have to come limping back here 20 years from now on the 40th
anniversary of Earth Day … and have the embarrassing responsibility
of telling your sons and daughters that you didn’t do your duty—that
you didn’t become the conservation generation that we hoped for.”
Nelson passed away in 2005, but in 2010 the Christian movement can
begin to do our duty—not to Nelson, not even to America, but to the
Creator-God.

Jonathan Merritt is the author of Green Like God: Unlocking the Divine Plan for Our Planet.