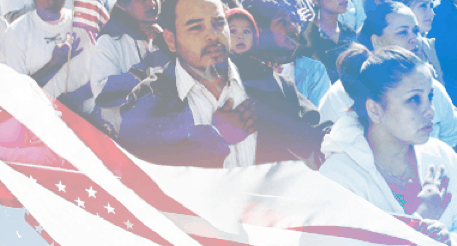 A coalition of evangelical leaders are behind a massive radio ad campaign that encourages lawmakers in six states to look at immigration reform. The Evangelical Immigration Table (EIT) has united Christian leaders from a variety of social, theological and political organizations including Sojourners President Rev. Jim Wallis, Dr. Richard Land of the Southern Baptist Convention, National Association of Evangelicals President Leith Anderson, Samuel Rodriguez, president of the National Hispanic Christian Leadership Conference and others. In a statement on their official website, the EIT states:

Our national immigration laws have created a moral, economic and political crisis in America. Initiatives to remedy this crisis have led to polarization and name calling in which opponents have misrepresented each other’s positions as open borders and amnesty versus deportations of millions. This false choice has led to an unacceptable political stalemate at the federal level at a tragic human cost.

As evangelical Christian leaders, we call for a bipartisan solution on immigration that: Respects the God-given dignity of every person; Protects the unity of the immediate family; Respects the rule of law; Guarantees secure national borders; Ensures fairness to taxpayer; Establishes a path toward legal status and/or citizenship for those who qualify and who wish to become permanent residents

May 26: Netflix Will Release the New Season of ‘Arrested Development’