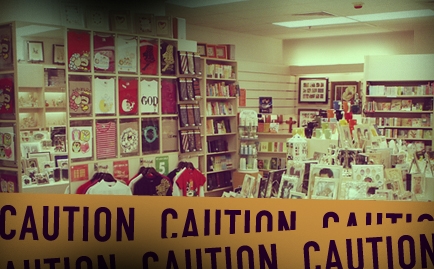 I bought Donald Miller‘s book A Million Miles In A Thousand Years for my wife recently … at Barnes & Noble—across the street from my local LifeWay store. I think I was too hard on them.

I planned to buy it at LifeWay, but when I pulled the book from the shelf, I discovered that it—and every book by Donald Miller at the store—comes with a slip of paper tucked inside, a note instructing me to get extra info on Miller from the cashier before making my purchase. So I did. The extra info turned out to be a warning which read, in part:

“We want you to know that the authors of books marked ‘Read with Discernment’ may have espoused thoughts, ideas, or concepts that could be considered inconsistent with historical evangelical theology.”

On LifeWay’s website the following further explanation is given:

“We at LifeWay Christian Stores are dedicated to providing biblical solutions that spiritually transform individuals and cultures.

“One way you can grow spiritually and intellectually is through reading. And whenever you read we encourage you to read with discernment, asking God to reveal His truth to you as you read …”

At the time the warning bugged me enough to send me across the street with my money. It shouldn’t have. Now, I like the warning. I like it so much, I wish it accompanied every purchase.

LifeWay warns Miller’s readers to exercise discernment because it believes his books to be inconsistent with historical evangelical theology in some way, yet instead of refusing to sell them, LifeWay chooses to profit from what it alleges to be heresy(ish). That seems a bit like Nancy Reagan going into the crack business. “Just say ‘No.’ First one’s free.”

But more odd is how LifeWay is defining “historically evangelical theology.” Actually, I’m not sure how they’re defining it.

What definition both condemns Miller as a heretic but approves the writings of Joyce Meyer and John Hagee?

It’s historical fact that Christianity was almost entirely led by pacifists for the first 300 years of its existence. Should LifeWay then carry books written by soldiers, books endorsing America’s wars, books by Oliver North, for instance? I mean, I don’t have a problem with Colonel North, who knows hundreds of ways to kill any man who has a problem with him, but Tertullian wouldn’t agree with the guy.

It’s historical fact that for most of Christian history individuals did not ask Jesus into their hearts or “accept Jesus.” Should LifeWay carry books and tracts that communicate personal salvation in such non-biblical, non-historically Christian terms? Would home churches that existed before Rome’s building projects scratch their heads at books on institutional church administration as well?

Is “historical” Christianity the stuff that happened after Constantine … or after Calvin … or is it after D.L Moody?

And what historical evangelical theology is communicated by paintings of cottages printed on mousepads, and T-shirts that print Scripture pulled from context across an American flag or keychains, or romance novels minus the sex?

Save Me from Myself

I was too hard on LifeWay. Or at least hypocritical. Anyone not exercising selective discernment may cast the first stone. Anyone?

Truth is, we all do what LifeWay appears to be doing here. I do this.

I read certain books fearfully, prayerfully, critically while others get a pass. I breeze through them with my heart and head wide open and unguarded. This guy is dangerous. That one not so much. Because he thinks like me, I guess.

This assumes I think like God, or that God thinks like me—that I’m not a heretic, that I don’t need God to protect me from myself.

LifeWay’s right: We need a warning. And the one they distribute with some books is a pretty good one to start with. Maybe they should stick it in every book. Or, better yet, print that advisory on a massive banner and hang it outside every store:

We want you to know that everything in here might be wrong. Exercise discernment.

I’d like one to hang up at my concerts:

I want you to know that everything I’ll sing and say tonight might be wrong. Exercise discernment.

And one for my church:

We want you to know that everything taught and sung here today might be wrong. Exercise discernment.

And of course one for my blog:

I want you to know that everything I write might be wrong. Exercise discernment.

Everything. Not just Donald Miller. Because, well, is selective discernment in line with historical evangelical theology?

Shaun Groves is a singer-songwriter and avid blogger. He is also actively involved with Compassion International, which you can find more information about by clicking here. This article was originally printed on his blog, and is used by permission.

A Look Inside: HBO’s In Treatment